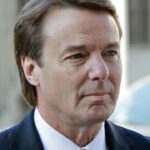 John Edwards, the former Democratic presidential contender, is now setting his sites on a new careers as a personal injury lawyers.

The former hopeful, whose aspirations ended when he was denounced for his affair with a “videographer” (Rielle Hunter) when his own wife was fighting breast cancer, has now reactivated his licence to practice law with the North Carolina State Bar.  He plans to open his new firm in Raleigh.

Edwards admitted his affair and that he fathered a child with Hunter.
His wife, Elizabeth Edwards, died in 2010 and he earlier lost a son to a car accident, which partly prompted Edwards to enter politics in the first place.

Edwards was acquitted of charges relating to finance fraud in respect of his presidential campaign in 2008 after a mistrial was declared in relatin to additional counts relating to his affair with Hunter and after the jury failed to agree.

After the trial, Edwards said he had done “an awful lot that was wrong”.

“I don’t have to go any further than the mirror. It’s me and me alone.”

Edwards is certainly no stranger to either personal injury law or establishing law firms.  He and David Kirby formed a firm in Raleigh in 1993, now called Kirby & Holt, and he became a highly successful North Carolina plaintiff attorney.

With his new firm, Edwards wants to specalize in personal injuries and medical malpractice. Among that firm’s notable wins is a $2.8 million malpractice settlement with a Hickory-area obstetrician that ended up before the U.S. Supreme Court last year on different issues.