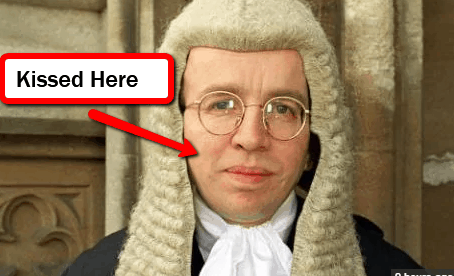 One of England’s top judges appears to have received a kiss on the cheek from a mugger who robbed him, according to reports.

Sir Robin Knowles QC was not far from the Royal Courts of Justice when the incident occurred in September last year.

The alleged mugger, robber and kisser was Terry Brown, 45, who is alleged to have required Sir Robin to hand over cash when the Judge was on his way home through Middle Temple Lane

The Evening Standard reported that the Judge “appears to have been kissed on the cheek by the mugger as he fled.”

Prosecutor Michael Williams told Inner London Crown Court that Knowles, a High Court judge in the Queen’s Bench Division since 2014, was approached by a man “holding a champagne bottle by its neck” and told to hand over his wallet.

Having parted with around £140 in cash, the judge reportedly told the court earlier today:

I did the calculation that the best thing for me to do was to produce my wallet rather than arguing or trying to run. I felt under a very real threat that the bottle would be used to hit me and I’m fully aware of how devastating the injury that type of action could cause. I was pretty focused on that danger.

Sir Robin was a barrister at South Square Chambers, where he specialised in financial law and company law and evidently helped the mugger escape when he could not find his way to The Strand.

It also appears that Brown stole the bottle of champagne that was used in the mugging from the nearby building earlier the same evening.

The prosecutor told the court a man was caught on CCTV entering the barristers’ chambers where barristers and clerks were enjoying a seminar and drinks reception. He was seen taking a coat and confronted by a staff member, before

Having apparently been spotted grabbing a coat, he was then confronted by a member of staff and subsequently seen leaving the building with the champagne.

After handing over his money, the mugger then placed a kiss upon the victim-judge’s cheek.