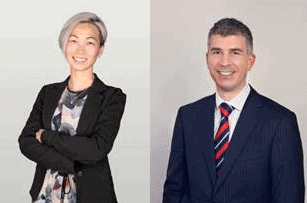 Powered by LawFuel – Two Lane Neave partners have been named in the 2021 edition of The Best Lawyers in New Zealand announced today.

Corporate and commercial partners Evelyn Jones and Graeme Crombie have been recognised by their peers in the legal industry. Jones has been named for the first time in the banking and finance law category, while Crombie is named in the information technology law category for the second year.

“We are thrilled to have two of our talented partners acknowledged for their work. Both Evelyn and Graeme are commitment to ensuring their clients get the outcomes they need, and it is a credit to their tenacity and skill that they have been recognised by their peers”, said Shaw.

“Beyond being a fantastic lawyer, Evelyn is also a wonderful leader of people who has built a strong and capable team around her. While Graeme’s specialist knowledge has seen him carve out a niche in his business that has earned him numerous accolades”, added Shaw.

Jones joined Lane Neave as a Partner in September 2017 and is based in the Auckland office. Her extensive experience includes corporate and institutional lending transactions, property finance, leverage and acquisition finance. Recently, she has advised major banks, private equity firms and corporates on matters such as peer-to-peer funding, establishment of securitisation programmes and receivables finance facilities, mergers and acquisitions.

Crombie has over 20 years’ experience in both the public and private sectors. He specialises in technology (including telecommunications) advising on all types of technology contracts, licensing arrangements, cloud services, terms of business, privacy policies, and data protection and cyber-security. He also advises on regulatory compliance when using technology. Crombie joined Lane Neave as a partner in 2016 and is based in the Christchurch office.