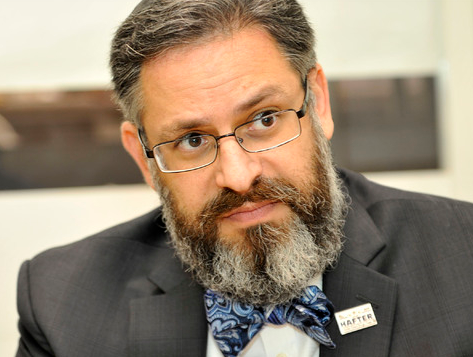 Courtroom outbursts go with the territory in terms of testy exchanges between attorney and Judge, but when Las Vegas lawyer Jacob Hafter was denied a motion to alter a trial date due to a conflicting Jewish holiday, he took to Facebook to call the Judge both a “racist” and an anti-Semite it didn’t go down altogether well.

Jacob Hafter, an orthodox Jew, filed a motion May 23 to “go dark” for two days this week during a medical malpractice and wrongful death trial brought by Eden Davis and the estate of Christopher Davis.

In their response to Hafter’s motion, attorneys for the plaintiffs said that the trial date had been set for almost nine months.

District Court Judge Valorie Vega — who is Hispanic and married to Review-Journal business reporter Howard Stutz, who is Jewish — denied the motion. Hafter petitioned the state Supreme Court but received no response.

Hafter, who is he representing Las Vegas Dr. Gautham Reddy in the malpractice lawsuit, said his religion prohibits him from working on Wednesday and Thursday during Shavuot, and he did not anticipate the conflict in August, when the trial date was set.

Hafter, a candidate for a District Court judge seat, resorted to Facebook on Friday. Vega, a 25-year jurist, is not running for re-election, and her term ends in January.

On his personal page, which was also shared on his campaign’s Facebook page, Hafter wrote: “30 years of legal experience means nothing if you are anti-Semitic or racist. We need to make sure that, especially in light of the concept of absolute judicial immunity, we have judges in office that will not purposefully trample on our constitutional rights just because they are intolerant of others.”

Two defendants in the case recently settled with the plaintiffs, and that would leave time for a break in the trial, Hafter said.

“Either she’s anti-Semitic or she’s biased against me,” Hafter said. “In either case, she shouldn’t be the judge in this case.”

Rabbi Shea Harlig of Chabad of Southern Nevada said Shavuot is one of three major holidays, aside from the high holy days, celebrated in Judaism.

But he added that Shavuot, which marks the giving of the Torah to the nation of Israel, “is not a holiday that a non-practicing Jew would really be familiar with.”

In court before jury selection Monday morning, the judge told Hafter and the plaintiffs’ attorneys that another lawyer and her husband informed her about the Facebook post, but she asked them not to give her details because she wanted to remain impartial during the trial.

Peter Wetherall, an attorney for the plaintiffs in the medical malpractice case, told Vega that the Facebook post amounted to a violation of professional rules of conduct for lawyers.

Wetherall said Hafter was “within his rights” to publish what he wants on Facebook “to a point.”

“None of us have the right to yell ‘fire’ in a crowded theater,” Wetherall said. “Either Mr. Hafter is of the opinion that professional rules don’t apply to him, or he’s purposefully trying to work a mechanism to obtain a mistrial or recusal.”

Wetherall also questioned whether jurors could be influenced by the post.

The judge said she would admonish the jury not to read social media that might reference the case.

Before court proceedings on Monday, Hafter said he was not aware, until being informed by a reporter, that Vega’s husband is also a Jew.

“He may not be observant, though,” Hafter said. “I have no idea what his level of observance or practices are.”

Hafter said he has been an attorney for 13 years and never had a problem moving a case for religious purposes.

In court, Vega asked Hafter if he would remove the post during the trial “so as not to taint the jury.”

“I don’t see anything offensive to this court or to the plaintiffs in it,” he said. “I just see a recitation of what happened in a factual manner.”