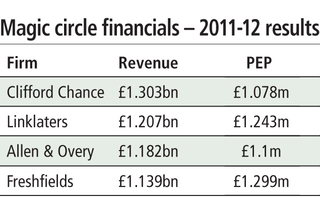 The deal count is down and so are profits so far as the biggest UK law firms are concerned.

Bloombergs report that the “billion pound” law businesses are suffering from slow deal days occurring with Clifford Chance, Allen & Overy, Freshfields about to report revenues that have slipped or will have shown only slow growth in the past year.

With revenue of more than 1 billion pounds ($1.5 billion), they are four of the largest in the world.

“When you’re a billion-pound business you have to put a lot of coal in the furnace every day,” Tony Williams, the founder of Jomati Consultants LLP, said in a telephone interview. “You’ve got a market where there’s not a hell of a lot going on.”

The firms have been relying more heavily on fees from litigation and regulatory advice as restructuring, deal work and advice in emerging markets slowed. The value of global deals shrank by 20 percent during the year that ended April 30 compared to the prior year, according to data compiled by Bloomberg.

Williams, who was previously the managing partner of London-based Clifford Chance, predicted that earnings at the four firms will remain close to flat. Revenue at the U.K.’s 10 largest law firms increased by 1.5 percent in the year that ended April 30, 2013, according to the accounting firm Deloitte LLP, which doesn’t do a separate breakdown for the five firms.

Hiring across the group increased by just over 0.5 percent in the same period, according to the accounting firm, which publishes a quarterly survey on the legal sector, without naming individual firm results.

“Firms are a lot more focused on running the business in as an efficient a way as possible,” Jeremy Black, a partner at Deloitte, said in a phone interview. “They are much more active in managing their headcount. There is a cost pressure.”