Let us introduce you to barrister Amal Alamuddin.  Who? you might ask.

She is an Oxford-educated lawyer fluent in French and Arabic, of Lebanese descent and also a graduate of New York University School of Law, representing recently WikiLeaks founder Julian Assange.

She is also George Clooney’s girlfriend.

The exotic beauty, 36, also has academic and writing credentials to her equally exotic name, having co-edited “The Law and Practice of the Special Tribunal for Lebanon”.

She is also the author of several book chapters and articles on international criminal law published by Oxford University Press,” her profile states 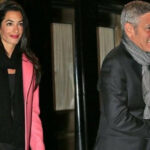 George Clooney and Alamuddin were sean leaving a restaurant in New York, smiling and noticeably more tanned after their holiday in Tanzania and the Seychelles.