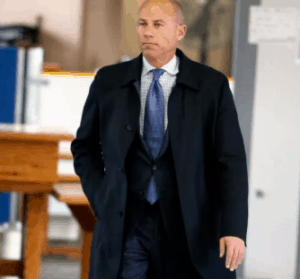 Audrey Strauss, the United States Attorney for the Southern District of New York, announced that MICHAEL AVENATTI was sentenced today in Manhattan federal court by United States District Judge Paul G. Gardephe to 30 months in prison for attempting to extort NIKE, Inc., and for defrauding a client.  AVENATTI was previously found guilty on February 14, 2020, following a three-week jury trial.

Manhattan U.S. Attorney Audrey Strauss said:  “Michael Avenatti used illegal and extortionate threats and betrayed one of his clients for the purpose of seeking to obtain millions of dollars for himself.  Not only did Avenatti attempt to weaponize his law license and celebrity to seek to extort payments for himself, he also defrauded his own client.  Avenatti will now serve substantial time in prison for his criminal conduct.”

According to the Complaint, Superseding Indictment, court documents, and evidence presented at trial:

In a scheme that unfolded in less than a week, AVENATTI used threats of economic and reputational harm to seek to extort NIKE, Inc. (“Nike”), while defrauding his client (“Client-1”), by promising to settle potential claims by Client-1 against Nike if Nike agreed to make extortionate payments to AVENATTI.  AVENATTI threatened to hold a press conference on the eve of Nike’s quarterly earnings call and the start of the annual National Collegiate Athletic Association (“NCAA”) basketball tournament at which he would announce allegations of misconduct by employees of Nike.  However, AVENATTI stated that he would refrain from holding the press conference and harming Nike only if Nike made a payment of $1.5 million to Client-1, who was in possession of information potentially damaging to Nike, and further agreed to “retain” AVENATTI and another individual to conduct a supposed “internal investigation” – an investigation that neither Nike nor Client-1 requested – for which AVENATTI demanded to be paid, at a minimum, between $15 million and $25 million.  Alternatively, in lieu of such a retainer, AVENATTI demanded a total payment of $22.5 million from Nike to resolve any claims Client-1 might have and to buy AVENATTI’s silence.

In addition to the prison sentence, AVENATTI, 50, of Venice Beach, California, was sentenced to three years of supervised release. The Court deferred a determination as to restitution for a later date.

Ms. Strauss praised the work of the FBI and the Special Agents of the United States Attorney’s Office for the Southern District of New York.

The case is being handled by the Office’s Public Corruption Unit.  Assistant United States Attorneys Matthew Podolsky, Daniel C. Richenthal, and Robert B. Sobelman are in charge of the prosecution.

US Attorney Announces Arrest of Russian Oligarch For Defying Sanctions

The Process of Buying a Property in Guildford