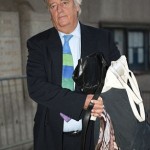 Legal aid cuts in Britain have had a devastating effect upon thousands of lawyers who used to work in legally-aided areas.  One of the highest profile of them is the leading, left wing barrister Michael Mansfield QC, who is closing his chambers nt he wake of the cutbacks.

The highly-criticised legal aid cuts have been the subject of sustained attacks by the legal profession and a spokesman for Mansfield’s chambers said the “reforms” were  ‘devastating’ and ‘threatening the rule of law’.

The Daily Mail reports that the closure comes after a revamp was announced in April to slash £220million from the £1billion a year criminal legal aid bill.

Tooks Chambers last night attacked Mr Grayling’s policies, despite admitting that 90 per cent of its barristers’ work is funded by public money.

A statement on the firm’s website announced its dissolution ‘with great regret’.

It added: ‘The dissolution of Chambers is the direct result of Government policies on legal aid. The public service we provide is dependent on public funding.’

The firm will cease operations on October 11 before being formally dissolved on December 27.

However, it said it will try to develop ways of supporting publicly-funded lawyers who are ‘committed to continuing the struggle for social justice’.

He was paid £743,421 during the Saville Inquiry into Bloody Sunday, which cost taxpayers £195million.