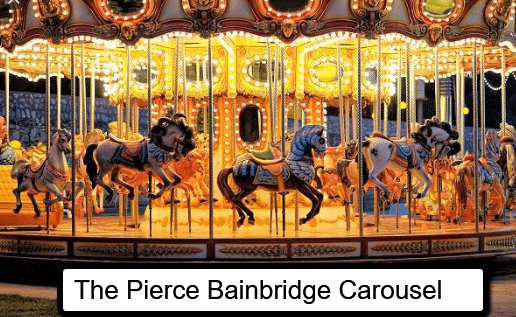 The bad news coming out of the self-proclaimed “Fastest Growing Law Firm in the History of the World” continues with reports not only of a flood of firm departures, but also now reports of fractured client relationships.

The firm, famously recently taking on Presidential lawyer Rudy Giuliani as a client, has had a colorful history.

The Pierce Bainbridge issues are multi-faceted.  There are lawsuits from a former partner. There’s a multi-million default declared by a litigation funder.  There are references to ethical violations per written judicial opinions.  And there are attorneys leaving in droves.

But there now seems to be a further issue hitting the firm:  Pierce Bainbridge clients.

It appears Pierce Bainbridge also has been experiencing client difficulties with reports that in the last several months, at least three such relationships have ruptured.

We’ve detailed the issues below.

However, the problems faced with departures continue for Pierce Bainbridge. We recently reported that at least fourteen (14) attorneys have hit the eject button on Pierce Bainbridge — seven (7) of them partners, which signals some serious issues within the firm.

Another associate has recently quite Team Pierce, which brings the recent exodus from the firm to at least sixteen attorneys.

Clairborne “Clay” Hane (right) has left the firm.  He was reportedly 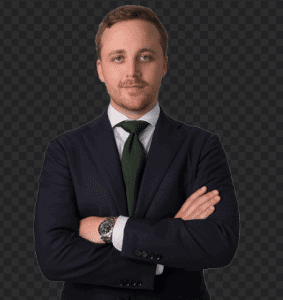 brought in with much fanfare due to his experience with class actions.  Pierce was reportedly effusive in his praise of Hane, who had formerly worked at Labaton Sacharow.  While Hane appears to have lasted slightly longer than one year, the other at least 15 attorneys – seven of them partners – who left before him did not. 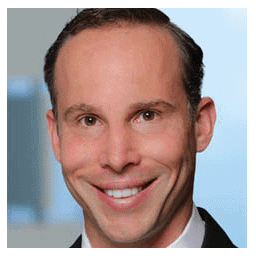 Out of the 16 reported attorney departures, none have publicly commented or done so in legal proceedings about their reason for leaving.

However former professional soccer player Michael Winograd (left) who bolted PB for Brown Rudnick after a few months reportedly referred to his new station as a “true law partnership”, an apparent jab at the embattled Pierce Bainbridge.

The seeming constant in the law firm founded in January 2017 has been John Mark Pierce and unprecedented staff turnover.

The firm is already on its third name, the first being Pierce Sergenian followed by Pierce Burns, and now Pierce Bainbridge.

Lewis has been at the forefront of exposing what appears to be the severe dysfunction and general chaotic nature of Pierce Bainbridge and which we have reported here at LawFuel, as well as in other legal media.

Lewis has two ongoing lawsuits in New York against Pierce Bainbridge, a slew of its partners, Littler Mendelson, its partners Jeanine Conley and Putney Twombly, and its partner Michael D. Yim.

The Lewis lawsuits are premised on accusations of financial misconduct, malice, deceit, defamation and dishonesty; we have followed the litigations closely and the Lewis accusations appear well-grounded.

In March 2019, Pierce Bainbridge withdrew from its representation of Greenway Nutrients just days before a true-up hearing for a default judgement.

The uncontested default judgement was speculated to be valued in the tens of millions of dollars. John Pierce penned a combative and threatening e-mail to his client – a copy is below. 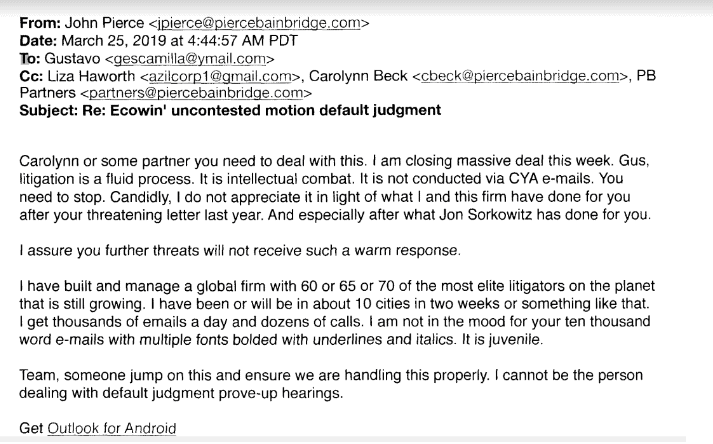 Pierce and his firm withdrew shortly thereafter, the client was left without counsel, and the case dismissed without prejudice – the uncontested default judgment, speculated to be worth in the tens of millions of dollars, wasted away.

The client has suggested foul play by Pierce and reported Pierce and the firm to the California Bar; an investigation was apparently opened and closed.

The California Bar has not provided any additional information. Pierce and partner Jonathan Sorkowitz were the partner leads on the case; Pierce’s e-mail to the client read:

In another case, firm partner Patrick Bradford (below, right) – whose tenure as a partner at Davis Polk ended amid some mystery – submitted a filing with Stephen Farrelly and Andrew Williamson of Pierce Bainbridge, suggesting another corroded client relationship. 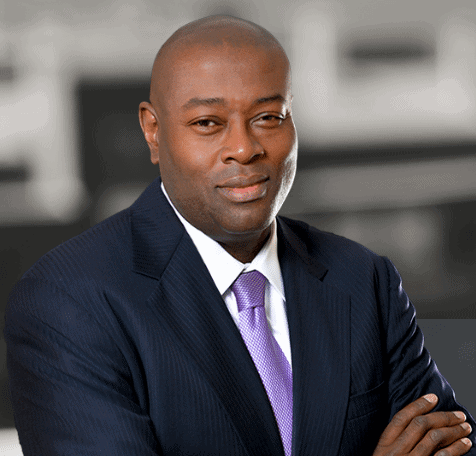 The firm also complained of purported non-payment and noted alleged related financial stress on Pierce Bainbridge.  The Bradford July filing also notes “37 partners,” which just months later is down to about 30.

In another case, on August 14, 2019, in New York Supreme Court, named-partner Maxim “Max” Price sought permission from the Court to withdraw as counsel for City Drive Films LLC and Principal Daniel Catullo III.

The motion states that “[Our client] does not consent to our withdrawal as counsel.”

The screenshot of the money paragraph from the Price submission is telling and once again suggests a firm unable to get along with its client:

It appears the above fallout with Catullo and City Drive in New York, bled over to the other side of the country.  On August 22, 2019, Managing Partner Pierce submitted the following to the court in Orange County, California –

Shortly thereafter, Pierce informed the court, in a filing on November 14, 2019, that Catullo and his corporate entities wished to fire Pierce Bainbridge as counsel. 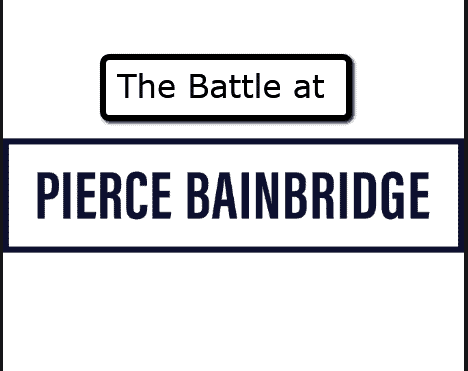 The Pierce Bainbridge Chronicles . . The Stories So Far

Harvey Weinstein:  5 Things to Know About His ‘Anti-MeToo’ Lawyer