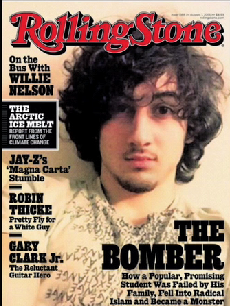 The Rolling Stone magazine has entered the fray with another controversy, this time over its cover image of accused Boston bomber Dzhokhar Tsarnaev and the issue of free speech, freedom of expression and other issues are mixing with outright outrage on social media.

Being on the cover of the Rolling Stone is one thing: but highlighting a travesty that had America in an uproar is another and the pop-culture magazine is coming in for a beating over its cover story on Dzhokhar Tsarnaev.

The self-taken image of the suspect bomber, taken in almost heroic, tousled hair pose, has inflamed those who feel the alleged mass murderer’s image already featured elsewhere should not have been used, critics say.

The Rolling Stone is not unused to featuring non-music figures in the midst of some publicity firestorm. However social media has become a major issue with boycott the Rolling Stone a major trending feature on Twitter.

Three years ago the magazine featured, Gen. Stanley McChrystal who lost his job as commander of the U.S. forces in Afghanistan as a result of an article that featured undiplomatic if not insulting comments about President Obama.

And it also featured mass murderer Charles Manson on the cover of Rolling Stone.

While the full text of the article isn’t out until released until Friday, it hardly sounds like a puff piece. Here’s the cover type: “THE BOMBER,” followed by, “How a Popular, Promising Student Was Failed by his Family, Fell Into Radical Islam and Became a Monster.”

The jury awarded Thomas Rinks and Joseph Shields, both of the Grand Rapids area, the full amount they were seeking when they filed suit in…

Oklahoma City securities lawyer A. Daniel Woska has never seen a year like this before. Usually, the arbitration expert handles 20 to 50 cases a…

The BBC will this week embark on the largest damage limitation exercise, arguably, of its 76-year history. A team of top executives and in-house lawyers…

As John Leslie faced the media scrum outside Southwark Crown Court yesterday, the strain of the past 10 months – during which his television career…