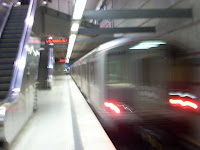 I wrote this great blog and wanted to post it on LawFuel so readers nationwide would see that technologies already being used in San Diego trains, would have deifinitely prevented the Chatsworth Metro-link train wreck. Read this and understand how they were negligent.
September 15, 2008 – By Michael Ehline, Esq.

On September 15, 2008, the North County Transit District expressed its condolences to the victims of the Chatsworth Metrolink accident, in its “Rider Alert” and basically proved beyond a shadow of a doubt – perhaps not on purpose – that the Chatsworth Metrolink Train was negligent. On its online “NCTD Commuter Alert”, NCTD discussed the fact that the “commuter train and a freight train in the Chatsworth area of Los Angeles” would not have occurred if it had in place the same, cheap, basic safety program that is currently in place in San Diego.

Readers will recall that Metrolink admitted liability, and then later the spokeswoman for Metrolink Chatsworth, Denise Tyrrell, resigned, allegedly under pressure from her supervisors. The investigation into the Chatsworth train crash has so far uncovered that the Metrolink train engineer failed to “observe and obey a stop signal on the tracks just before the accident occurred”, the “Rider Alert” explains.

NCTD uses an operating contract partner, TransitAmerica Services, Inc., and has in place operating rules, procedures, and mechanical equipment that could have prevented the September 12, 2008, Chatsworth train crash. NCTD requires train engineers to call out all signal indications over the radio, as each signal is approached by one of their trains. NCTD rules also prohibit train engineers from using cell phones during train operations. NCTD also explained that “Adherence to these rules is regularly monitored and tested through field observations.”

NCTD in addition to the above, has mechanical equipment such as a “a built in audible warning system in the train cab.” And get this, when a train engineer doesn’t stop the train at a red train signal, THE TRAIN AUTOMATICALLY STOPS!! On top of that, the train dispatcher is automatically notified of the problem.

So basically, the Rider Alert proves that the accident could have easily been prevented with available technologies already being used in another California city. In other words, the Rider Alert” proves Chatsworth Metrolink negligent!