Kattan’s Mercedes struck a Department of Transportation vehicle on a California freeway.

The California Highway Patrol says the Mercedes was seen weaving in and out of lanes shortly before 2 a.m. Monday on the 101 Freeway in Los Angeles.

The CHP says Kattan drove into a DOT vehicle that belonged to a crew conducting maintenance on a guardrail. No injuries are reported.

The 43-year-old Kattan was jailed on suspicion of DUI. 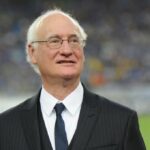