You are here: Home / News / US Intervention will Backfire, Says Syria & Iran 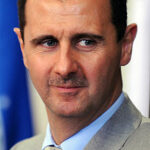 Syria is claiming any US intervention would backfire and that President al-Assad is achieving “one victory after another until restoring security and stability to the homeland.”
[wp_ad_camp_3]
The comments were made on the Syrian Online website in discussions with staunch Syrian ally Iran.

The meeting between the two allies discussed the situation in the region and the latest developments related to the US threats of launching a military aggression against Syria.

President al-Assad affirmed during the meeting that the US threats will not discourage Syria from commitment to its principles and firm stances, and combating terrorism backed by regional and Western countries, especially the US.

For his part, Dr. Boroujerdi, expressed the support of the Iranian leadership and people to Syria in the face of aggression, stressing that the honest people in the region will not allow foreign schemes that are targeting Syria’s role and the security and stability of the region’s populations to pass.

He considered that any external aggression on Syria will be a failure and will backfire on the aggressors as the ”US and its agents in the region, especially the Zionist entity, will be the main loser in this adventure.”

The flimsy pretexts that Washington is using to justify its threats have become exposed to the international public opinion, Boroujerdi said, adding that Iran advises all people of common sense around the world to put pressure on the US to spare the region and the world the risks of inflaming wars that no one can control.