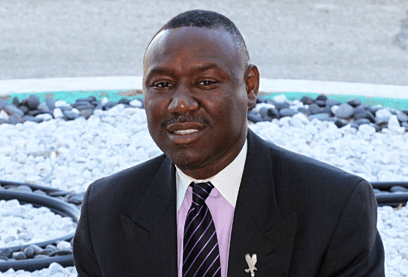 Benjamin Crump is the go-to lawyer for racially-inflamed police shootings and now, with the Corey Jones shooting in Miami, he once again heads for the white-hot limelight of a black shooting.

Mr Crump has become a nationally renowned civil rights attorney who has frequently represented colored people who have alleged the violation of rights by police. He is also the recently sworn 73rd President of the national Bar Association.

Police officers from Palm Beach Gardens said this week they had found a handgun at the scene where a officer shot and killed Corey Jones over the weekend.

The Jones case adds to Mr Crump’s growing list which rose to national prominence with the Trayvon Martin shooting of the unarmed black teen killed by neighborhood watch volunteer George Zimmerman in 2012.

Since the Trayvon case he has dealt with the families of Michael Brown and Tamir Rice in the shooting in Ferguson that set off violent protests for months. Tamir was the 12 year old killed by a police officer in Cleveland.

He also represented a Pittsburgh teenager who was paralyzed after a police shooting, a Florida man suffocated under a police cruiser, a California woman who lost consciousness while handcuffed in the back of a police vehicle and now . . Corey Jones.

The Jones family is planning a protest for Thursday at 10 a.m. at the Palm Beach Gardens Police Department.  Al Sharpton is scheduled to attend the protest.

Crump graduated from the Florida State University College of Law in 1995 and co-founded the Tallahassee, Fla. law firm Parks & Crump.

Although his firm has focused its efforts previously upon personal injury cases, wrongful death and medical malpractice, the civil rights cases have created a huge increase in work for the firm since he began with the press conference calling for the arrest of George Zimmerman.  Zimmerman was subsequently charged and acquitted at trial.

To quote his own law firm profile:

ttorney Crump believes in fighting to preserve the justice that minorities have achieved throughout the civil rights era and therefore served as General Counsel to the Florida State Conference of the NAACP, sits on the Board of the Innocence Project, and the Equal Justice Institute.  Mr. Crump was elected as the Board Chairman of the Internationally Renowned Tallahassee Boys Choir, and he is the Past President of the National Florida State University Black Alumni Association. Mr. Crump is a Life Member and Chairman of the Grand Tribunal of Omega Psi Phi Fraternity, Inc., Life Member of the Southern Christian Leadership Conference, and Life Member of the the NAACP and Urban League. He is also a member of Sigma Pi Phi Boule and the Michael R. Moore Lodge 764 PHA, Free and Accepted Masons. Furthermore, Attorney Crump and partner Daryl Parks share their firm’s largesse with the community that has embraced them–most notably, they have endowed scholarships at Florida A&M University, Livingston College, and Florida State University for minority law students, as well as Bethune Cookman University.

He also has a vision for his role with the NBA.

“My vision for the NBA this year is simple: Preserving Our Past and Protecting Our Future,” Crump said in a statement. “We will also advance our legislative agenda by lobby Congress on issues such as voting rights, criminal justice, judicial advocacy, education and employment and economic empowerment.”

Whether its as NBA president or as civil rights advocate, we will be hearing a lot more from Benjamin Crump.