You are here: Home / Latest News / The Lawyer Bubble and One Lawyer’s Warning 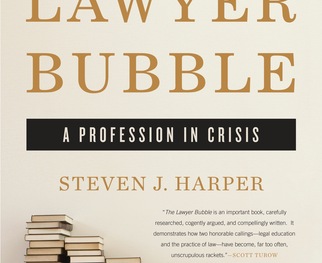 It’s not Grisham.  Nor is it Alan Dershowitz, but former Big Law partner Steven Harper has nevertheless written a grim tale of impending doom about the business of law.

His book, “The Lawyer Bubble: A Profession in Crisis” outlines the decline of the business of law due to the rapid increase in lawyers, spurred forward by a legal education establishment that provides exaggerated promises of legal riches.

The result, according to Harper’s book, is the implosion of firms like Dewey & LeBoeuf and others.  Harper is a former partner of Kirkland & Ellis, writing a blog ‘The Belly of the Beast’ and other matters about the law and such scandals ad the DLA Piper billing scanda.

The high rates of depression and suicide among lawyers is another issue, notwithstanding legal careers that appear to make lawyers both successful and happy, quite apart from wealthy.

The global financial crisis has lead to a worsening of the situation with a declining law jobs market and increased pressures. Steven Harper’s book provides a sage if grim outline of how the current situation emerged and what might be done about it – if anything.

The mismatch occurring between those with jobs and those without them, along with heightened career issues and the rapidly changing outlook for law careers is one that has created a crisis of confidence in the law profession.

He comes down hard on the law schools who with open arms welcome new students, bright-eyed and ambitious for their new careers in law, as well as law deans who accept student loans to bolster the numbers at their schools.

His case is to rethink the way in which legal education should proceed, as well as the way in which law firms have developed their business models.  Taking both an economic as well as a legal perspective on the issue, the legal thriller is not necessarily what a lot of lawyers or prospective lawyers want to read, but it is a tale that had to be told and Steven Harper’s book creates something that needs to be read and understood by law deans, law students and lawyers everywhere.