When Palmerston North-born lawyer Larissa Trownson moved law jobs from NZ Winegrower’s legal counsel to a contestant in a racy TV reality show – Too Hot To Handle – she made some major decisions about herself and wound up leaving the Netflix show before the season ended.

The show, which has been shown in almost 200 countries, has created a fan following for Larissa Trownson, with one website describing her as being ‘a perfect mix of sexy and smart’. 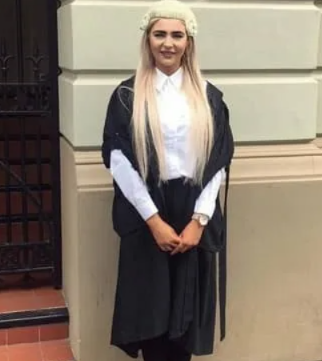 The 28 year old Victoria University of Wellington graduate who holds a double degree in Criminology, Political Science, and International Relations and Law from the university who also went on to work  with the TEC (Tertiary Education Commission) handling submissions to Parliament and working with the WTO (World Trade Organization) prior to the Winegrowers role

She  hardly guessed that she would wind up in the show reaching millions of viewers, although her bikini modelling and risque Instagram account reached over 16k followers and her ability to project her body and sexuality were attributes that ultimately lead to the Netflix gig.

Now in its second season, the show of ‘sexy singletons’ compete for a $100,000 pot prize in a luxury setting  in the Turks and Caicos Islands.  The show’s angle is that to win the money the contestants have to resist temptation with the contestants finding ‘true love’ rather than quick flings.

It’s all a long way from handling the Winegrower’s legal work, but for Larissa it was also a moment of some self-realization.

In an interview with Daily Mail Australia earlier this month, she admitted to getting a breast enlargement, regular Botox injections and lip filler.

And she left the show saying her transparency about what she had done was important for all women.

‘So I’ve always been upfront about it and I chose to have it, so I’m proud of it.

“I’m all about breaking stereotypes.,” she said.

She hasn’t announced what her next job might be – legal work, or otherwise – but she’s happy with where she is currently and what she has done in exiting the racy show.