Damian Williams, the United States Attorney for the Southern District of New York,  Michael J. Driscoll, the Assistant Director-in-Charge of the New York Office of the Federal Bureau of Investigation (“FBI”), and Matthew S. Axelrod, Assistant Secretary of Commerce for Export Enforcement, announced today that the United States of America has been authorized to seize a Boeing 787-8 aircraft and a Gulfstream G650ER aircraft owned and/or controlled by Russian oligarch Roman Abramovich, pursuant to a seizure warrant from the U.S. District Court for the Southern District of New York, which found that the airplanes are subject to seizure and forfeiture based on probable cause of violations of the Export Control Reform Act (“ECRA”) and the recent sanctions issued against Russia.

U.S. Attorney Damian Williams said:  “Today’s affidavit and warrant demonstrate the Southern District’s commitment to bring to bear every legal tool available for enforcement of sanctions and export controls imposed in response to Russia’s illegal war in Ukraine.  Our international partners — nations devoted to the rule of law — far outnumber those jurisdictions where these aircraft can safely hide, and our investigation of illegal exports in violation of U.S. law will continue unabated.”

FBI Assistant Director Michael J. Driscoll said:  “These wealthy Russian oligarchs have helped foster an environment that enabled Russia to pursue its deadly war in Ukraine.  The seizure of their valuable possessions, including these two aircraft, is just one way the U.S government holds accountable those who break U.S. laws and support Russia in its attempt to conquer a sovereign nation.  Our work has only just begun and we won’t back away.”

Assistant Secretary of Commerce for Export Enforcement Matthew S. Axelrod:  “The Commerce Department has put in place unprecedented export controls in response to Russia’s illegal war against Ukraine.  Today’s action, and our recent changes to make such actions public when brought, provides notice to the world of our commitment to enforce those controls aggressively in a transparent way, consistent with our commitment to the rule of law.”

Task Force KleptoCapture Director Andrew C. Adams said:  “Today’s action reflects the global scope of the United States’ response to illegal Russian aggression in Ukraine.  While we seek to execute on these warrants, the Task Force eagerly anticipates working with international partners to uphold the rule of law and reminds members of the aviation, insurance, and financial industries that these aircraft constitute tainted property under active investigation by the United States.”

According to the seizure warrant and affidavit sworn out today:[1]

In response to Russia’s invasion of Ukraine, the U.S. Department of Commerce’s Bureau of Industry and Security (“BIS”) issued various sanctions against Russia that impose export controls and license requirements to protect U.S. national security and foreign policy interests.  These Russia sanctions include expanded prohibitions on the export, reexport, or in-country transfer of U.S.-manufactured aircraft and aircraft parts and components to or within Russia without a BIS license, and eliminate the availability of any license exception for aircraft owned or controlled, or under charter or lease, by Russia or a Russian national.

The Boeing (pictured below), bearing tail number P4-BDL and manufacturer serial number 37306, is believed to be worth approximately $350 million. 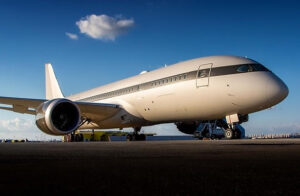 The Gulfstream (pictured below), bearing tail number LX-RAY and manufacturer serial number 6417, is believed to be worth approximately $60 million. 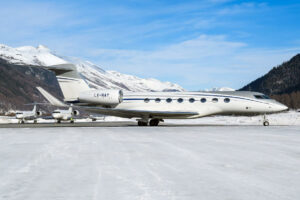 Mr. Williams praised the outstanding work of the FBI and BIS.  In a charging letter that separately issued today, BIS initiated administrative proceedings against Roman Abramovich, seeking penalties of up to twice the value of the Boeing and the Gulfstream.  Mr. Williams further thanked the Justice Department’s National Security Division and Office of International Affairs, the U.S. Treasury Department’s Office of Foreign Assets Control, and Her Majesty’s Attorney General for the Bailiwick of Jersey for their assistance in this investigation.

This case is being handled by the Office’s Money Laundering and Transnational Criminal Enterprises Unit and National Security and International Narcotics Unit.  Assistant United States Attorneys Joshua A. Naftalis, Anden Chow, Michael D. Lockard, and Kaylan E. Lasky are in charge of the investigation.

The investigation was coordinated through the Justice Department’s Task Force KleptoCapture, an interagency law enforcement task force dedicated to enforcing the sweeping sanctions, export controls, and economic countermeasures that the United States, along with its foreign allies and partners, has imposed in response to Russia’s unprovoked military invasion of Ukraine.  Announced by the Attorney General on March 2 and run out of the Office of the Deputy Attorney General, the task force will continue to leverage all of the Department’s tools and authorities to combat efforts to evade or undermine the collective actions taken by the U.S. government in response to Russian military aggression.