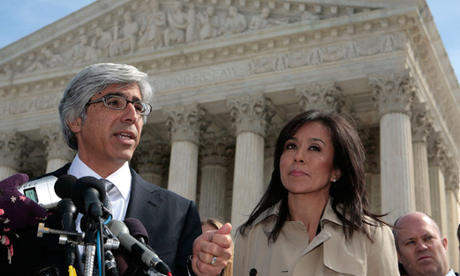 Gibson Dunn is a Big Law firm who have represented Walmart, the world’s biggest retailer who also faced a massive gender discrimination claim.

However their Supreme Court claim fighting 1.5 million female employees in a case that could have cost the company tens of billions of dollars.

Their lawyer, Ted Boutrous (pictured) won the case and demonstrated how his firm secured future business, but also strengthened the case of many other companies that supported the Walmart position.

On a March morning in 2011, lawyer Ted Boutrous approached the lectern at the US supreme court in the gender discrimination lawsuit brought by the company’s 1.5 million female employees

If the women prevailed, Walmart stood to lose tens of billions of dollars. Yet before Boutrous even began – “Mr Chief Justice and may it please the court” – he had already succeeded in one significant way: As a result of his work on the case, Walmart was becoming a lucrative client of his law firm, Gibson, Dunn & Crutcher.

Today, Gibson Dunn handles real estate, securities, corporate, environmental and other legal matters for Walmart – work that has generated more than $50m in new revenue for the firm, say people familiar with the relationship.

The Walmart case caught the attention of Boutrous in 2004, shortly after a federal judge in San Francisco certified the class of 1.5 million women, the largest class in American history.

A few months after Boutrous made his oral argument before the court, Walmart won. In a 5-4 ruling, the court determined that the class of 1.5 million was too large to prove a pattern of discrimination.

The business community hailed the decision as one that would curtail specious lawsuits. Gibson Dunn posted a letter to clients the day after the ruling.

“This is an extremely important victory for all companies, large and small, and for their employees,” the letter said.

The Walmart case illustrates not only how a supreme court victory helped a firm secure future business, but also how firms look for ways to use the high court to benefit all their corporate clients.