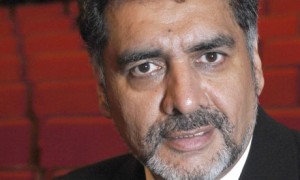 He may not be a lawyer, but UK investor, entrepreneur and television “Dragon’s Den” star James Caan is set on taking his law firm investment – in Midlands firm, Knights – right into the top ranks of UK’s legal business. The aggressive investor intends to make the break into the legal big time through acquisitions.

Naming himself after the actor who played Sonny Corleone in “The Godfather” movies, Caan was originally Nazim Khan of Pakistan, before seeking and making his fortune in the UK, originally by selling leather jackets in east London.

But he then made his fortune in recruitment (Alexander Mann) and setting up a private equity company. The investment in law businesses is something more recent, having been made one year ago. Following the investment in Knights, Caan has also made a foray into another law business, the virtual law firm Excello, whose lawyers work from home or from virtual offices.

“I have been building and developing businesses for over 30 years and Excello Law demonstrate quality business values that I look for in all the firms I partner with,” he said in a statement after buying into Excello.

“The legal services market is evolving and Excello is embracing these changes by providing a simple cost effective legal service. I believe that SMEs are absolutely key to the UK economy recovery and Excello are setting the standard for other firms in their sector to adapt and stay ahead of their competitors.”

But it is now his plans to expand his Knights’ law firm investment that has the UK law world watching the flamboyant entrepreneur.


As The Lawyer magazine reports, Knights’ Managing partner David Beech acknowledged that Caan’s enthusiastic aim of cracking the upper echelon of the UK law firm league table would be “much longer term plan”.

In the meantime, he said, “we are concentrating initially on getting into the top 100”.

Regulators granted Knights an alternative business structure licence six months ago, formalising Hamilton Bradshaw’s financial ownership of part of the firm (19 December 2012). Since then it has beefed up fee-earning staff numbers by a quarter, taking the total to around 170.

The former equity partnership has effectively been dissolved at the firm. Beech remains the only lawyer full equity partner in the business, with seven former equity holders having been bought out of their investment as a result of the Hamilton Bradshaw deal.

Beech is quick to point out that all the former equity partners remain with the firm on a fixed share basis, saying, “they are all happy with the arrangements”.

Beech acknowledged that Caan’s enthusiastic aim of cracking the upper echelon of the UK law firm league table would be “much longer term plan”. In the meantime, he said, “we are concentrating initially on getting into the top 100”.