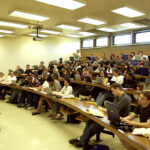 The law jobs market is crumbling, according to US reports where graduates have been poured out of law schools and then coming to the reality that the jobs aren’t there.
[wp_ad_camp_1]
In the US, law schools are actually cutting down the size of law classes, with more than two out of every five graduates in 2011 failing to find a full-time job using their degree. This was confirmed in a letter from the Coalition of Concerned Colleagues to the American Bar Association.

Paralegals increasingly perform work formerly done by new associates, according to labor market specialists. Specialized computer software searches are also able to sift through thousands of legal documents using a fraction of the time needed by a human. Corporations and local, state, and federal government agencies are cutting their legal spending budgets, and many cases that formerly involved lengthy legal battles are increasingly settled through negotiations.

In addition, law firms are outsourcing certain legal research to foreign countries, which is a cost saving. Foreign lawyers are typically paid far less than U.S. lawyers.
An overabundance of lawyers, a declining need for legal professionals, and exorbitant law school costs has become the perfect storm driving many prospective students away from a career in law.

Law school admission offices are adjusting to the decrease in number of applications by cutting down on class sizes for upcoming classes, according an October Kaplan Test Prep report.

In a new Kaplan Test  Prep survey, 54 percent of law school admissions officers report cutting their entering law school classes for 2013-2014 and 25 percent plan to do so again next year.

“Law school applications for the fall of 2013 have dropped 17.9 percent,” said an article by the ABAJournal. Due to this drop, competition at top law schools is less than in past years. Even students with less-than-perfect test scores are now admitted to top law schools.

All this downsizing of law school classes and decreasing of applications go back to the problem of decreasing job openings for lawyers. However, this doesn’t mean that the job market for lawyers has dried up.

According to the Bureau of Labor Statistics (BLS) “Occupational Outlook Handbook,” jobs in the legal sector will increase by about 10 percent between 2010 and 2020, yet this increase is too small for placing new law graduates.