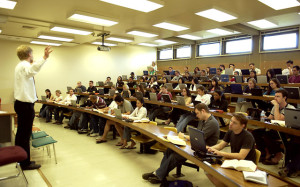 Enrollments at US law schools are waaay down, reports show.  An article in the WSJ and other media indicate that the law has become less attractive with an 11 per cent drop in enrollments according to the American Bar Association with students cocnerned about job prospects and debt levels.

One upside for those who do register at law schools is the reduction in competition levels and that might make it a good time to apply.  And there are some law schools that actually increased their class sizes, according to the ABA figures.
[wp_ad_camp_1]
However, the MarketWatch report revealed that so far, 39,675 full-time and part-time students enrolled at the 202 ABA-approved law school, nearly 5,000 fewer than in 2012.

That’s one student shy of 1977 enrollment levels, when the ABA reported 39,676 first-year students. The lowest previous tally was in 1975, when 39,038 students entered their first year of law school and there were only 163 ABA-approved schools (the current count is 202).

The 2013 drop extends a decline that is now in its third year. More than 52,000 would-be lawyers entered their first year of law school in 2010, an all-time high. Many of those students were thought to be seeking shelter from the economic tumult of the recession.

But even then the job market for newly-minted attorneys was contracting.

Many big law firms laid off junior lawyers during the downturn and slashed expenses as clients facing their own financial troubles pressed for discounts. Some lower-level legal tasks that firm associates used to do, such as document review, are now increasingly farmed out to contract attorneys or legal outsourcing companies that can do the work more cheaply.

“I think the collapse of the job market a few years ago was a surprise to the profession, and to law schools,” said Barry Currier, the ABA’s managing director of accreditation and legal education.

The market remains challenging for recent graduates, some of whom emerge with loans that can total more than $150,000.

Those considering legal careers appear to be paying attention. This fall, approximately two-thirds of the 202 U.S. law schools accredited by the ABA reported declines in first-year enrollment. That slide exceeded 10% at 81 law schools, though the ABA has declined to say which ones.