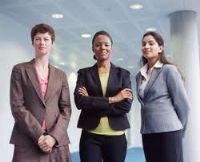 Sexist memos and behaviour is nothing new to law firms, but Clifford Chance has now got itself into hot water over a memo advising their US female employees not to giggle or to show cleavage when making presentations.  Good advice, maybe.  Or maybe not.
[wp_ad_camp_1]
Certainly the memo –  “Presentation Tips for Women,” has been blasted by employees and media after it was first published.  There was plenty of good advice relating to either sex, but it was the female-targeted material that drew the ire of so many of the women everywhere – and plenty of men, too.

“[F]emale associates are very upset by not only the elementary nature of the tips themselves, but the suggestion that these would only apply to women,” an anonymous e-mail recipient tells Above the Law.

“We have never been a very female friendly firm, but this is beyond the pale.

While many of the 150 tips seem reasonable when applied to both genders — “make sure your cellphone is turned off” or “define all acronyms” — a number of them are being called out as condescending.

Some of the offending tips include:

The memo was circulated by a senior female partner of the company’s women’s committee after she had been invited to share her personal presentation tips at a meeting.
[wp_ad_camp_3]
Shortly after the memo made international headlines, Clifford Chance released the following statement defending it.

The original presentation and associated tips represented a personal perspective, shared with a group of colleagues, some just starting out in their careers. The more than 150 points are based on what this individual has found helpful as a public speaker in a broad range of business environments. While much of what is covered is common sense, we believe that it is important that women as well as men are given access to a range of different viewpoints and approaches; there is no Clifford Chance template on how people should present. The offense caused by a small percentage of the suggestions in the tip sheet was entirely unintentional.

Clifford Chance is one of the largest law firms in the world with around 6,000 employees in 35 officesacross the globe. Last year, the firm reeled in a whopping $1.9 billion in revenue.

What are your thoughts on the offending memo? Are any of the tips useful, or are they just over-the-top and unnecessary? Tell us in the comments below.