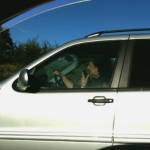 Despite popular belief, hands free cell phone usage by drivers is no more safe than texting activities. In fact, National Highway Traffic Safety Administration studies have found that compared to both hand held and hands free phone usage, real world driving experiences have demonstrated that both are equally unsafe.
The fact is that when drivers put their attention on anything other than driving the car, they are taking a chance of risking an accident. Below are 4 reasons that demonstrate why voice commands on smartphones are at least equally as dangerous as texting and can lead to devastating circumstances, including jail time.

1. Experts on cognitive distraction have learned that talking to computers requires far more precision than simply talking with another person. One reason that engaging voice commands is so much more distracting than speaking is that this activity requires more concentration, despite the fact that drivers are not using their hands.

2. Similar to foreign accents, synthetic computer voices are harder to understand than the human voice. This requires more attention and focus. Therefore, it can be more distracting for drivers. Also, computers in cars and on devices are not made with the same error free high fidelity systems. Therefore, speech to text systems cause a great deal more distraction for drivers.

3. The speech intonations in regular phone conversation allow people who are listening to provide indications that they have heard what a speaker has said. However, computers do not offer that type of feedback. This increases the complexity of trying to communicate something coherently making it much more difficult and causing more distraction for drivers.

4. Text messaging is banned in 41 states as well as the District of Columbia, with others soon to follow. In most states, local jurisdictions have cellphone, texting and distracted driving laws that impose serious penalties. For instance, violations can result in heavy fines, inability to obtain future car insurance, license suspension and jail time. All of these circumstances affect a person’s ability to continue their driving privileges and could physically and financially devastate them and their victims for the rest of their lives.

National Highway Traffic Safety Administration study findings have prompted authorities to limit the use of voice driven technologies in vehicles to only core driving activities. While a simple and quick voice command to perform a task like turning on a windshield is not particularly distracting, concentrating on creating text messages and deciphering responses to voice commands takes much more effort and time. The more complex and the longer interactions are, the more likely that drivers will experience dangerous impairments while driving.

Rather than risk accidents by texting or using voice commands and driving, consider taking a break and stopping alongside of the road. Arrange to go over directions and have conversations while stopping for gas or taking a meal or bathroom break.

Unfortunately, many drivers do not use common sense and believe that because they can, they should use voice activated systems. Therefore, anyone who finds themselves the victim of an accident caused by a distracted driver should contact an accident lawyer as soon as possible.

Even if it is not apparent that the accident was caused by distracted driving, experienced counsel will thoroughly investigate the facts to determine the cause of the accident. In this way, victims can be assured that their legal rights will be protected and they will receive compensation for any damages that were caused.

Having a friend whose husband is now paralyzed from using voice commands on his smart phone and crashing into the back of a semi-truck, Jennifer Alston knows the dangers and flaws that voice commands have. The costs from the damages stamped a “Bankruptcy” sign on the friend’s family. Alston researched http://www.orlandocriminalteam.com/  for more information on proper representation in Florida for her friend’s husband.