You are here: Home / Lawyers / 4 Things That Give Lawyers Sleepless Nights

They may seem like they’re high-powered, no-nonsense professionals with the world at their feet, but at the end of the day, lawyers are human beings too. Just like all of us, they experience their share of bad days and sleepless nights as well.

It’s no secret that being a lawyer is one of the most stressful professions. In the long term, several lawyers tend to become unhappy with their job and life and even suffer from depression.

In this post, we take a look at a few factors that keep lawyers up at night.

While we all enjoy watching the glamorous courtroom dramas in our favorite movies and TV shows, in reality the scene is far from that. Few, if any, lawyers can actually afford to make time to theorize about law and its aspects.

The profession of law is extremely demanding of your time and energy and can become the source of immense stress. The work environment is hyper-competitive and the high-pressure. One can say that this profession isn’t for the faint-hearted.

Given these facts, there’s little wonder as to why lawyers tend to be on the edge. In order to become a successful lawyer, it is essential that you are thick-skinned, not just to the courtroom drama, but also the negative public image that this profession can carry. Such an image can result in self-loathing, which can be damaging to the lawyer’s happiness.

A lawyer also has to be prepared to, sometimes, handle difficult cases (and clients), the facts of which can go against his/her personal beliefs.

However, every case needs to be handled subjectively and the emphasis needs to be placed on the cold hard facts and evidence rather than anything else. Such work can bring about job dissatisfaction and an inner conflict, which can lead to sleepless nights

Lawyers are always portrayed as high-strung professionals fighting it out in the courtroom in the best suits and boots. Hence, we assume that lawyers make a ton of money.

In most of the cases, however, this isn’t entirely true. In truth, the vast majority of lawyers are not rich. In fact, many struggle to earn even a decent amount of money, especially at the start of their careers.

The reason for this points towards the demand-supply gap. With law schools mushrooming and churning out fresh law graduates every year and the slow pace of business growth, it has become a largely buyer’s market, wherein clients have the upper hand.

This helps them negotiate a deal which suits them better, whereas the lawyer’s hourly/contingent fee receives a blow. The lawyer is then left with two options – either having no work, or having work with reduced pay, of which the latter is, without a shadow of a doubt, more feasible

It is important that students deciding to take up law as their career have the right idea about what it is and what it is not. Most youngsters today tend to look for instant gratification, instant career progression, before they can even learn to apply their knowledge.

The reality, however, can come as a setback, especially to those who have harbored unrealistic expectations about making money in this profession.

In comparison, government lawyers seem to be more satisfied with their jobs than private lawyers, which is why a lot of law students have begun to head straight to the bar after graduating with the hope to better achieve work satisfaction and get credit for the job they do.

Private lawyers, on the other hand, tend to feel saddled under heavy workloads with less pay and minimal authority, and even face job insecurity, all of which become a source of dissatisfaction.

4. An Attitude of Pessimism 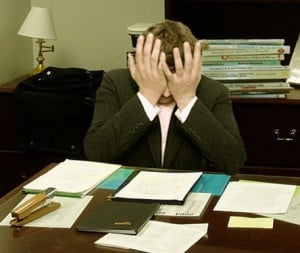 By taking on their client’s cases, lawyers also take on their problems. In time, lawyers tend to perceive every problems as inescapable and everlasting, as that is what their profession demands to a great extent. A judicious and prudent approach to a case enables an effective lawyer to foresee every noose and catastrophe that may occur in any operation.

As a matter of fact, being pessimistic or the trait of prudence about things is actually considered a favorable trait in lawyers. The ability to anticipate the gamut of problems and betrayals can go a long way in defending clients against even the most unfathomable eventualities. If a law student doesn’t already think like that, being in law school should teach it to him.

However, a trait that makes you good at your profession may not necessarily make you a happy professional. Not all lawyers may be able to limit their prudence to their workplace. Most tend to carry it with them even outside the four walls of their office. Not only do they forecast how badly things might turn out for their clients, they also apply the same logic to their own lives.

Pessimistic lawyers are, well, pessimistic and more likely to be convinced that nothing will go according to plan, and generally tend to worry more than their optimistic counterparts.

Pessimism that becomes such a deep-rooted part of the professional life can have serious implications on the personal life as well. The real test lies in being prudent and yet remember to draw the line outside the practice of law.

There is a difference between being a lawyer and being a great lawyer. While being great at anything requires one to go the extra mile, one should also know when to be realistic and draw the proverbial line and separate his professional and personal life.

Being a lawyer can be stressful and consuming, but by taking a few conscious preventative measures, one can sort out any mess. If you’re a lawyer, or looking forward to becoming one, you will do well to be mindful of the above pointers so as to be able to find a better balance and get peace back into your life.

Todd A. Walters is a top family law and divorce attorney at The Walters Law Group Ltd., based out of Illinois, Chicago. Mr. Walters is dedicated to resolving legal matters related to divorce, child custody and other family law issues. Walters and his team have ample knowledge and ability to represent such cases and obtain the best results for their clients.