Ian Jack writes a weekly column for the Guardian and has written widely on various matters, inckluding as a foreign correspondent.  This op-ed piece is from The Guardian. 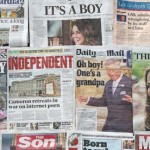 Irony is a dangerous quality: it can return to haunt you. A few weeks before Prince William married Catherine Middleton in 2011, the Guardian published an editorial praising the prince as “a bastion of tradition with a deeply modern sensibility” who promised to be “a new kind of king”. The editorial went on: “For too long, a hairshirt tendency on the left has insisted that a commitment to progressive values is incompatible with an appreciation for the magic and wonder of royalty. But in this era of austerity, couldn’t we all do with being a bit more ‘happy and glorious’?”


It was time to put away the cynicism and bring out the union jacks. The Guardian would be refocusing its staff, recalling reporters from some “less newsworthy parts of the globe”, so that they could provide unrivalled royal wedding coverage, including a round-the-clock live blog.

The piece appeared on the morning of 1 April. Readers who’d forgotten the date might have been deceived until they reached sentences describing Kate’s “worklife challenge” as an accessories buyer for Jigsaw and the new range of “attractive commemorative crockery” the paper was about to produce; as with all the best April fools, the reader had moments of not-quite-knowing, of confusion, of wondering if their favourite paper had taken leave of its senses.

Could it really be that the Guardian was renouncing the commitment to republicanism that it made in December 2000? Stranger things have happened, or rather would happen in future. Look at the Guardian of Tuesday this week, and the April fool’s editorial of 2011 becomes less a joke than a prophecy. Nearly all of the front page and four pages inside, the work of at least half-a-dozen writers and reporters: and all for what? A BIRTH, A BOY, A PRINCE, A KING, ran the headline – a very good headline, too, Laurence Olivier could have spoken it, so much grander than DUCHESS OF CAMBRIDGE HAS A BOY.

It had a poetical and historical ring – but didn’t the poetry in it also seem to cheer on the process it was describing? Unless you believe that the string of four nouns ended in a sigh with an unspoken fifth – A LEECH, say, or A DOLT – then it would be hard to imagine the Guardian was doing otherwise than appreciating “the magic and wonder of royalty” it had so heavily ironised on April fool’s day, 2011.

In other words, it was having a cake that it had eaten 13 years ago with the declaration that it hoped Britain would become a republic – gradually and only after “vigorous and grown-up debate”, but with the clearly implied hope that the Queen would be our last dynastic head of state. It would be wrong to equate coverage with editorial approval – reports of floods and famines don’t exist to celebrate them – but the tone and scale of the Guardian’s did nothing to contradict the notion that suddenly the nation had burst out singing. And perhaps the fact was that the nation had done so, at least as an infinitely suggestible chorus conducted by most TV channels and every newspaper with the exception of the Financial Times. Not, perhaps, that the Guardian had set out to cheer, but babies are harder than weddings to ironise, and the pages of serious newspapers are now inspired by the presentational tricks of more popular ones, encouraging headlines to be sentimental instead of, or as well as, informative. And if a sentiment has to be chosen by the writer and the page editor, how much nicer to get in the mood and choose a nice one, the event being a birth, rather than something as cold and sharp-edged as the guillotine.

That the techniques and temper of modern journalism are the enemies of republicanism is an idea that the late Christopher Hitchens understood and lamented. In a piece published in the same Guardian issue that raised the republican flag, Hitchens wrote of how royal coverage operated in the press “with the intensity of Gresham’s law”, the bad driving out the good and “encouraging laziness and sentimentality and salacity by making it too easy to fill page upon page with brainless twaddle, and encouraging contempt for the readership that makes itself such an easy target”.

His argument was interesting. What Hitchens proposed was not that we abolish monarchy but that we “transcend it or, to put it in more old-fashioned terms, that we grow out of it”. We needed to begin the process of emancipating ourselves from “the mental habits of royalism”, including “the infantilism and cretinism of the press”. That way, it would melt away in the face of our disregard.

Read the rest of the commentary here.