Divorce supremo lawyer Lauren Wasser has landed her biggest client in Angelina Jolie and the media circus will only grow.

As the lawyer for such celebrity splitters as Kourtney Kadashian, Halle Berry and others, Wasser is the unquestioned queen of celebrity divorces.

Her first major, headline-grabbing case involved Stevie Wonder, who was being sued by his ex-girlfriend for $30 million for allegedly giving her herpes.

TMZ report that she is to represent Jolie with the unholy trinity being blamed for the break as the kids, substance abuse and anger. 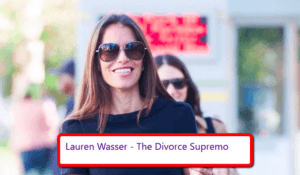 Our sources say, Angelina became “fed up” with Brad’s consumption of weed and possibly alcohol, and mixed with what she believes is “an anger problem” … felt it became dangerous for the children, said TMZ.

The divorce looks like a bitter and public spat that will engage the tabloids for some time to come, including Pitt-camp claims that Jolie was irrationally jealous of  Marion Cotillard (allegedly  causing a scene on the set of Pitt and Cotillard’s forthcoming film Allied, according to media reports.

It will be a circus, no doubt.

Her charge-out rate according to reports is $850 per hour, and she will typically require a $25,000 retainer.  Her client roster normally includes representation of clients of $10 million-plus.

Wasser was always pressured to succeed.

She told Interview Magazine that have two lawyer parents created her destiny in the law – “I was actually conceived the night that my dad found out that he passed the bar exam, so they decided that my initials would be L.A.W.”

The “Brangelina” split will add to Wasser’s reputation as a divorce lawyer par excellence and further elevate her role in the legal ecosystem of star-pulling lawyers.