Recent developments in deep learning artificial intelligence have enabled almost anyone to superimpose facial features—including an entirely different face—into a preexisting video with relatively minimal effort. Until very recently, editing facial features in a video has been incredibly difficult.

Even movie studios with access to professional video editing tools have struggled with the task as recently as in 2017, when actor Henry Cavill—portraying everyone’s favorite son of Krypton—sported a mustache he was contractually unable to remove during reshoots, leading to a widely criticized post-production digital shave.

Because of the inherent difficulty in convincingly manipulating video to appear realistic, the public has widely been trusting of video’s authenticity while viewing still photos more skeptically. With recent developments in artificial intelligence, this thinking must now change.

On February 7, 2018, Reddit shut down multiple subreddits discussing the use of video editing techniques based on artificial intelligence tools to superimpose celebrity faces onto other peoples’ bodies in pornographic scenes.

The tools and guides posted on these subreddits made it relatively easy for anyone to accomplish what was previously a difficult task. Even though these subreddits have been shut down, the genie is out of the bottle—the knowledge, information and tools contained in these pages is entering the mainstream.

What is new . . is the ease with which people are going to be able to create very convincing fictional videos of others

We’ve previously discussed the likelihood of issues arising out of the growing use of video and voice manipulation technology and the legal implications of the use of these technologies.

The legal issues here are not new, as we also pointed out in the past as the creation of celebrity memes became increasingly common. What is new, however, is the ease with which people are going to be able to create very convincing fictional videos of others.

The legal recourse for people that find themselves in videos that never actually occurred will depend on what is taking place in the video and how the video is used. If the video can be deemed an attack on the person’s character, then the person may have a claim for defamation or false light. If the video commercializes the person—putting a celebrity into an advertisement they never actually participated in, for example—then there may be a claim based on the right of publicity.

Given that such rights can survive death and that the use of this technology only requires images of the person being superimposed, this particular technology should be on the radar of estate-planning professionals, as well.

Inevitably, the ability to seamlessly manipulate and mesh images and video is becoming something anyone can do. AI and machine learning, coupled with human ingenuity, are making processes that were once technically challenging into trivial pursuits.

With this comes the age-old bit of conventional wisdom—just because one can do something doesn’t mean one should. More relevant to those seeking to navigate an ever-evolving legal landscape, though, is the corollary—once something is able to be done, someone, somewhere, will do it. For companies, estates and individuals, the question becomes how best to prepare for and ward against the consequences. 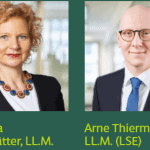