Clyde & Co – A recent Federal Court of Australia judgment highlights the predicament faced by directors being pursued in civil proceedings when there is the prospect that they may be facing criminal prosecution for offences arising out of substantially the same conduct.

When hearing civil proceedings for a declaration of contravention, pecuniary penalty order, disqualification order or company compensation, courts must apply the usual rules of civil evidence and procedure. Under these rules, the standard of proof is the balance of probabilities. In criminal matters, however, the prosecution bears the legal burden of proving every element beyond reasonable doubt.

No civil proceedings under the Corporations Act are to be stayed merely because the proceedings disclose, or arise out of, the commission of an offence.1 However, a court must not make a declaration of a contravention or pecuniary penalty order against a person who has already been convicted of an offence constituted by substantially the same conduct.2 This bar on subsequent proceedings was introduced to address “double jeopardy” concerns raised due to directors’ and officers’ facing exposure to both civil and criminal penalties for the same contravention.

The legislature does not address what should happen if a director or officer being pursued in civil proceedings is faced with the prospect of a criminal prosecution being commenced against them, but charges have yet to be laid.

In Australian Securities & Investments Commission v HLP Financial Planning (Aust) Pty Ltd 5, a criminal prosecution of the director was “on the cards”. The court declined to entertain the application for declaratory relief and stood the matter over until a final decision was taken as to whether the director would be prosecuted. The court said that if the director was to be charged it would dismiss the proceeding against him and leave it to the criminal court to decide his fate. On the other hand, if the decision was not to lay charges, the civil proceeding could resume.

In Australian Securities & Investments Commission v Flugge 6, the court held that s 1317N of the Corporations Act did not preclude a stay of civil proceedings when criminal proceedings had not yet been instituted but were “on the cards”. The court found that there existed a real and not merely a notional danger of injustice should a stay not be granted.

The court granted a stay to all applicants with the exception of the one applicant who was not facing a real possibility of criminal proceedings being instituted against him.

In Australian Securities and Investments Commission v Craigside Co Ltd 7, the court ordered a stay of civil penalty proceedings pending a decision from ASIC as to whether it would bring a criminal prosecution.

The court considered ss 1331 and 1317P and held that these did not prevent a stay where there is a risk of substantial injustice by the continuation of a civil proceeding which outweighs the interest in all proceedings being heard and determined in the ordinary course. The court was satisfied that prosecution of the defendants in respect of the same subject matter was “on the cards”, and if the civil proceedings continued, ASIC might indirectly obtain evidence prejudicial to the defendants in a future criminal prosecution.

A recent judgment of the Federal Court has considered this line of authority and the sections discussed above, although it should be noted that this was not a civil penalty proceeding.
Citation Resources Ltd v Landau

In Citation Resources Ltd v Landau, Citation claimed damages against a former director, Mr Landau. Citation sought a declaration that he had breached his director’s duties under the Corporations Act and related relief.

Citation alleged that that on or about 1 April 2015, Mr Landau opened a bank account without authority from Citation, into which its money was banked. Citation further alleged that payments were made out of the account for Mr Landau’s benefit or for the benefit of others without authority from Citation. In particular, Citation contends that the payments were:

made to third parties who had no lawful entitlement to be paid the amount, without Citation having any legal authority to make the payments, for which Citation received no consideration and without any authority from Citation; and
not in its best interest, not made for a proper purpose, caused detriment to it, gained an advantage for those to whom the payments were made and gained an advantage for Mr Landau as a shareholder of certain related companies.

The court considered two applications. The first was by Citation for limited discovery of documents relating to the alleged transactions. The other application was made by Mr Landau for an indefinite stay of the proceedings.

The applications were made against the backdrop of an ASIC investigation into Mr Landau in relation to possible criminal charges arising from the same underlying facts and allegations in the civil proceedings. Furthermore, in separate proceedings 8, ASIC had earlier obtained freezing orders in relation to Mr Landau’s assets, income and the companies. In that proceeding, an ASIC officer swore an affidavit stating that Mr Landau was potentially facing criminal action as a result of ASIC’s investigation.

Mr Landau opposed giving discovery of the documents on the basis that it might compromise his position in the ASIC investigation. Mr Landau sought an indefinite stay of the proceedings on the basis that a criminal prosecution was ‘on the cards’, arguing that there was a real prospect of criminal charges being laid against him arising from the same facts and matters which are the subject of the proceedings.

The main issue was whether there was a reasonable possibility that Mr Landau would face criminal prosecution. Mr Landau contended that the matters pleaded against him sought to raise the same topics being investigated by ASIC and could give rise to a criminal prosecution. In this way he sought to draw parallels with the “on the cards” cases. He also referred to s 1317N which (as referred to above) provides that civil penalty proceedings for a declaration of a contravention are automatically stayed if criminal proceedings are commenced against a person for substantially the same conduct.
Judgment

Justice McKerracher noted that Citation also relied on s 1317N of the Corporations Act to argue that the legislature has clarified that a proceeding will only be stayed on the actual institution of criminal proceedings, and that it is a reasonable inference that until that point is reached, a stay was not appropriate.

Justice McKerracher noted that the expression “on the cards” had been interpreted by the courts to mean “a reasonable possibility”. However, his Honour said that the “mere potentiality” of a prosecution falls well short of a prosecution being “on the cards”. He noted that in the Craigside and HLP cases, a decision to prosecute had not been made and a brief had not been sent to the relevant prosecuting authority. On the other hand, the prospect of the criminal prosecution of Mr Landau appeared to be more advanced than in either of those cases.

Justice McKerracher considered that while any one particular factor alone is not to be taken to be sufficient to constitute formation of an opinion that criminal prosecution is “on the cards”, the totality of the following factors supported such a possibility:

ASIC having sought and maintained a freezing order;
ASIC having applied for travel restraint orders and, in doing so, indicated that Mr Landau was potentially facing criminal charges;
ASIC having conducted a detailed investigation into Mr Landau relating to the same subject matter as the civil proceedings and into a number of suspected contraventions constituting criminal offences which were not mere regulatory offences;
ASIC having conducted examinations lasting seven hours;
The fact that the allegations made in the civil proceedings, as with the investigations by ASIC, are serious allegations; and
An ASIC officer having sworn that Mr Landau might potentially be facing criminal charges.

Justice McKerracher considered that the following further factors were also in favour of Mr Landau’s application:

Having considered all the above factors, Justice McKerracher held that it was premature to conclude that a criminal prosecution in relation to the matters the subject of the pleaded case was “on the cards”. His Honour dismissed each of the applications and determined that as each had taken a similar amount of time there would be no order as to costs.
Conclusion

This decision provides a further useful and practical discussion of the “on the cards” line of cases. It does, however, demonstrate that courts may be reluctant to grant a stay of civil proceedings in circumstances where criminal proceedings are only a mere possibility and not “on the cards”.

It is understood that the Federal Court proceedings against Mr Landau are continuing. 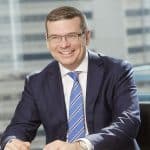 Christopher Smith has over 20 years of experience as an insurance lawyer, principally in the areas of directors and officers and professional indemnity insurance.  The article was co-written with Danielle Shiells.