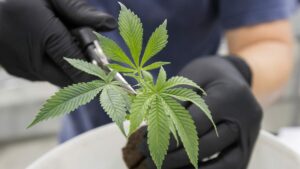 Locke Lord – Those who follow the cannabis industry (and our blog) well know by now that federal cannabis reform is speculated about regularly, but has not seen much tangible progress to date. Industry followers also know that lack of access to traditional banking and financing remains a major handcuff on most industry participants.

While some have been able to navigate these constraints better than others, there can be no reasonable debate that this issue is a prevalent hindrance on the industry. For example, when a profitable cannabis operator wants to expand, it cannot simply get a construction loan from a bank to build out its cultivation facility.

That operator typically will either raise funds in exchange for equity or enter into a private financing deal that includes an interest rate or other terms that are far less favorable than what the financing markets provide other industries—how tedious. As such, the industry has been awaiting banking reform with bated breath.

It seems the tide could finally turn with the upcoming 117th Congress (although you have probably heard that before). While comprehensive marijuana reform seems unlikely, particularly if Republicans retain control of the Senate, banking reform is likely to be back on the agenda because the cannabis industry continues to garner bipartisan support, and the climate is ripe to maximize the economic boost from this industry, both in terms of job creation and tax revenue generation.

When Arizona, South Dakota, New Jersey, Montana, and Mississippi legalized recreational or medical marijuana in the recent election, 11 Republican House members and 5 Republican Senators were added to the club of lawmakers from states with some form of legal marijuana. For this reason, according to PoliticoPro, “GOP lawmakers from already legal states say this is likely to affect Republican perceptions of cannabis policy.”

Indeed, Representative Dave Joyce (R-Ohio), who is Co-chair of the Congressional Cannabis Caucus, remarked “[n]ow it’s a matter of federal policy getting in line with the states and not punishing them for making the decision that they’ve made.” So even with a Republican-majority senate, there appears to be more need and support than ever for legalization on issues such as banking.

Joyce said he and Cannabis Caucus Co-Chair Earl Blumenauer (D-Ore.) are working to bring together a cannabis coalition in the coming weeks that includes members from newly legal states.

Locke Lord is a full-service law firm that has earned a solid reputation for complex litigation, regulatory and transactional work on behalf of clients in important and growing industry sectors around the world.