Cindy Crawford has alleged that a picture of her in a bikini that went viral was doctored to make her look bad. 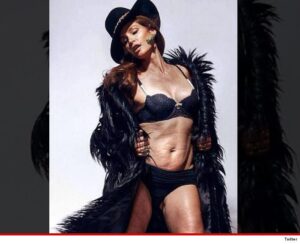 Although many thought the photo of the famed model was great, taken a couple of years ago, the social networks went ballistic over the “flab”.

The lawyer for Cindy Crawford’s photographer sent out a letter, threatening everyone who posted it with a lawsuit if they didn’t take it down and apologize for it.

The lawyer claims the original pic was stolen and then doctored to make the model look bad.

The picture showed Crawford posing in a bikini with a fur jacket. The photographer claims Cindy’s midsection was made to look aged and haggard.

The photographer who took the picture is claiming someone stole the picture from him and photoshopped it.
[table id=10 /]