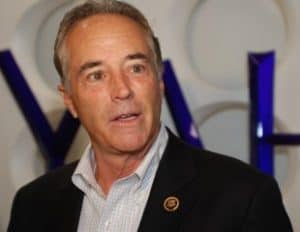 CHRISTOPHER COLLINS, CAMERON COLLINS, and ZARSKY are each charged with conspiracy, securities fraud, wire fraud, and making false statements to the FBI. All three defendants surrendered this morning and will be presented and arraigned at 2:30 p.m. today before United States District Judge Vernon S. Broderick in federal court in the Southern District of New York.

In a separate action, the United States Securities and Exchange Commission (“SEC”) filed a civil action against CHRISTOPHER COLLINS, CAMERON COLLINS, and ZARSKY.

U.S. Attorney Geoffrey S. Berman said: “Congressman Christopher Collins is charged with insider trading and lying to the FBI, as are his son, Cameron Collins, and Stephen Zarsky, the father of Cameron’s fiancée. As alleged, Christopher Collins tipped confidential corporate information to his son, who traded on the inside information and passed it on to others, including Zarsky. Zarsky allegedly also traded on the information and tipped others. Representative Collins, who, by virtue of his office, helps write the laws of this country, acted as if the law did not apply to him. These charges are a reminder that this is a nation of laws, and everyone stands equal before the bar of justice. The charges demonstrate again that no matter what the alleged crime, or who allegedly committed it, we stand dedicated to the pursuit of justice, without fear or favor.”

FBI Assistant Director-in-Charge William F. Sweeney Jr. said: “Congressman Christopher Collins sat on Innate Immunotherapeutics’ Board of Directors for a period of more than three years, spanning the run-up to the company’s clinical drug trial announcement in 2017. When he received confidential information that the drug had failed its trial, he tipped off investors with whom he shared a personal relationship, as we allege. Congressman Collins thought giving his family and friends a heads-up about material, nonpublic information would benefit them in the long run, but here’s a better inside tip for those who think they can play by different rules: Access to this kind of information carries with it a significant responsibility, especially for those who hold a position of trust in our society. Act honorably and in accordance with the law, and do not lie to a special agent of the FBI.”

According to the allegations in the Indictment unsealed today in Manhattan federal court:[1]

In or about June 2017, CHRISTOPHER COLLINS, who, in addition to serving on Innate’s board of directors, was also one of Innate’s largest shareholders, participated in a scheme to commit insider trading. Specifically, on or about June 22, 2017, CHRISTOPHER COLLINS learned that MIS416 – a multiple sclerosis drug that Innate was developing – had failed a critical drug trial that was meant to determine the drug’s clinical efficacy (the “Drug Trial”). The negative Drug Trial results were highly confidential, and, as an insider who owed duties of trust and confidence to Innate, CHRISTOPHER COLLINS was obligated to keep the Drug Trial results secret until Innate publicly released them. Instead, in breach of those duties, CHRISTOPHER COLLINS tipped his son, CAMERON COLLINS, who was also a substantial Innate shareholder, so that CAMERON COLLINS could make timely trades and tip others before Innate publicly released the Drug Trial results. CAMERON COLLINS traded on the inside information and passed it to ZARSKY, as well as to three conspirators not named in the Indictment (“CC-1,” “CC-2,” and “CC-6”), so that they could utilize the information for the same purpose. ZARSKY, in turn, traded on the information and used it to tip three more conspirators not named in the Indictment (“CC-3,” “CC-4,” and “CC-5,”) so that they too could engage in timely trades in Innate stock. All of the trades preceded the public release of the negative Drug Trial results.

In total, these trades allowed CHRISTOPHER COLLINS, CAMERON COLLINS, and ZARSKY, as well as CC-1 through CC-6, to avoid over $768,000 in losses that they would have otherwise incurred if they had sold their stock in Innate after the Drug Trial results became public.

In or about October 2014, Innate initiated a Phase 2B clinical trial of its primary drug, MIS416. Successful completion of the Drug Trial was a necessary prerequisite to the commercialization of MIS416. Because Innate had no other significant products in development, its stock price was tied to the success of MIS416.

The Drug Trial was widely expected to be completed around the summer of 2017. For example, on or about June 9, 2017, Innate’s chief executive officer (“CEO”) sent various individuals, including CHRISTOPHER COLLINS, an email stating that “the delivery date for [the] review and ‘verdict’” of the Drug Trial “will [] occur at COB on US Thursday June 22nd.” As the summer progressed, individuals within Innate remained optimistic that MIS416’s Drug Trial results would be positive. The initial Drug Trial results were made available by trial administrators to Innate’s CEO on June 22, 2017. These results established that MIS416 lacked therapeutic value in the treatment of multiple sclerosis. The results were not publicly released at that time. Instead, they were released publicly on June 26, 2017, after the U.S. markets had closed (the “Public Announcement”). Innate’s stock price subsequently crashed, dropping 92% on the first trading day following the Public Announcement.

Dissemination of the Drug Trial Results

On or about June 22, 2017, at approximately 6:55 p.m., Innate’s CEO sent an email describing the Drug Trial results to the company’s board of directors, including CHRISTOPHER COLLINS. The email explained to Innate’s board of directors for the first time that the Drug Trial had been a failure. The email began, in part, “I have bad news to report,” and continued to explain that “the top line analysis of the ‘intent to treat’ patient population (ie every subject who was successfully enrolled in the study) would pretty clearly indicate[s] ‘clinical failure.’” The email continued, “Top-line 12-month data . . . show no clinically meaningful or statistically significant differences in [outcomes] between MIS416 and placebo,” and concluded by stating, “No doubt we will want to consider this extremely bad news. . . .”

CHRISTOPHER COLLINS did not trade himself, and his Innate stock ultimately declined by millions of dollars in value when the Drug Trial results were made public on June 26, 2017. As CHRISTOPHER COLLINS well knew, however, he was virtually precluded from trading his own shares for practical and technical reasons. For example, CHRISTOPHER COLLINS was already under investigation by the Office of Congressional Ethics (“OCE”) in connection with his holdings in, and promotion of, Innate. Indeed, he had been interviewed by OCE personnel on or about June 5, 2017, just 17 days earlier. Accordingly, he did not trade his own stock and instead tipped CAMERON COLLINS.

Trading and Tipping by CAMERON COLLINS and ZARSKY

Furthermore, after learning the Drug Trial results from CHRISTOPHER COLLINS, on or about the night of June 22, 2017, CAMERON COLLINS provided the Drug Trial results to at least the following three sets of individuals so that they could trade in advance of the Public Announcement: (1) his now fiancée, CC-1; (2) ZARSKY and ZARSKY’s wife, CC-2; and (3) CAMERON COLLINS’s friend, CC-6. Collectively, these individuals avoided approximately $186,620 in losses as a result of their trading on inside information.

On or about the morning of June 23, 2017, ZARSKY provided the negative Drug Trial results that he had learned from CAMERON COLLINS and CC-1 to at least the following individuals, among others, or otherwise caused them to trade or attempt to trade in advance of the Public Announcement: (1) his brother, CC-3; (2) his sister, CC-4; and (3) his longstanding friend, CC-5. Collectively, these individuals avoided approximately $10,900 in losses as a result of their trading on inside information.

After the Public Announcement, CHRISTOPHER COLLINS took steps to prevent the public from learning that CAMERON COLLINS had sold significant portions of his Innate stock on or about June 23, 2017, and June 26, 2017, before the Public Announcement. For example, on or about June 28, 2017, one of CHRISTOPHER COLLINS’s staff members issued a statement to a local reporter. This statement stated that “Neither Christopher Collins, [nor] his daughter . . . have sold shares prior, during or after Innate’s recent stock halt,” and that “Cameron Collins has liquidated all his shares after the stock halt was lifted, suffering a substantial financial loss.” This statement was written in a manner designed to mislead the public into believing that CAMERON COLLINS had not sold any Innate shares prior to the Public Announcement. As CHRISTOPHER COLLINS explained in an email about press coverage surrounding Innate, “We want this to go away.”

False Statements to the FBI

A chart identifying the charges and the maximum penalties applicable to CHRISTOPHER COLLINS, CAMERON COLLINS, and ZARKSY is below.

The maximum potential sentences in this case are prescribed by Congress and are provided here for informational purposes only, as any sentencings of the defendants will be determined by the judge.

Mr. Berman praised the work of the FBI and thanked the SEC for its assistance.

This case is being handled by the Office’s Securities and Commodities Fraud Task Force. Assistant U.S. Attorneys Scott Hartman, Robert W. Allen, Max Nicholas, and Damian Williams are in charge of the prosecution.

The allegations contained in the Indictment are merely accusations, and the defendants are presumed innocent unless and until proven guilty.

[1] As the introductory phrase signifies, the entirety of the text of the Indictment, and the description of the Indictment set forth herein, constitute only allegations, and every fact described should be treated as an allegation.