You are here: Home / Awards / Cravaths – The Best Law Firm in the World?

Which law firms would rank among the very best in terms of universal admiration by their peers?  It’s Cravath’s according to a new book.

The question is one that arose in a new book “What It Takes: Seven Secrets of Success from the World’s Greatest Professional Firms” By Charles Ellis.

The author looked at what he considered to be the five best professional firms in the world and chose Cravath Swaine & Moore, the New York based law firm as one of them.

Was there one thing in common among these professional leaders?  He found there was. 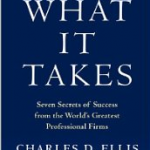 They were firms who in fact had several common traits including leaders who devote thier lives to serving their firms along with knowing how to motivate staff to go the extra mile and also a knack for getting highly individual professionals to work properly and effectively in teams.

The leaders were also focused on recruiting new employees who are not only talents but suited to the corporate culture.  Great effort has been put into the recruitment process.  For instance the McKinsey firm interviews 200,000 people annually and recruits just one per cent.

Interviewees at McKinseys can be interviewed up to eight times bewfore being offerd a job and at Goldmans the interviews may double that number.  The firms regard recruitment as the beginning of a long term, if not life-time relationship.

Cravaths have always been regarded as one of the very best law firms in the world and like the others in the group, it also has a clear mission.  In Cravath’s case it is to be “the most effective law firm on the most difficult cases involving US law”.  While the objective may not sound the most inspirational, it is nonetheless very clear and one that sets the goal posts for what its staff and partners are expected to adhere to.