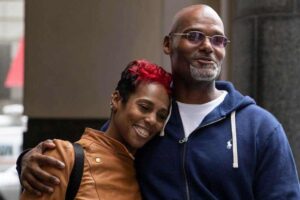 Powered By LawFuel –Willie Veasy, a Philadelphia man first convicted of murder in 1993, has been cleared this week of all charges and freed thanks to Jim Figorski and Christine Levin of Dechert and the Pennsylvania Innocence Project at Temple University Beasley School of Law. This is Jim Figorski’s second successful case in partnership with the Pennsylvania Innocence Project.

Mr. Veasy first sought the assistance of the Pennsylvania Innocence Project in 2009, and Dechert joined the team in 2017.

On January 24, 1992, in Philadelphia, two men were shot and one man, John Lewis, died. Six months later, Philadelphia detectives charged 26 year-old Willie Veasy with Lewis’s murder based on an eyewitness identification. Despite testimony from Veasy’s coworkers, detectives were able to secure an alleged “confession,” which Willie Veasy immediately recanted and claimed that the police fabricated. Nevertheless, the confession was enough to lead a jury to convict him of second degree murder, and he was sentenced to life in prison without the possibility of parole.

He maintained his innocence, however, and ultimately evidence emerged indicating that his case may have been part of a pattern of coerced false confessions and witness statements. Following an exhaustive review, the Conviction Integrity Unit at the Philadelphia District Attorney’s Office recommended that the court vacate Mr. Veasy’s conviction. When the court agreed to vacate the conviction, the District Attorney’s Office immediately declined to re-try the case, and Willie Veasy was free to go.

“Christine Levin and I are honored that the Pennsylvania Innocence Project sought our assistance in investigating and litigating Mr. Veasy’s case,” said Jim Figorski. “None of us can imagine the anguish he endured as he spent 27 years in prison for a crime he did not commit, but we are honored that we could work with the Pennsylvania Innocence Project in finally obtaining justice for Willie Veasy.”

Dechert is a leading global law firm with 26 offices around the world. We advise on matters and transactions of the greatest complexity, bringing energy, creativity and efficient management of legal issues to deliver commercial and practical advice for clients.