You are here: Home / LawStars / Eliot Spitzer and the Rise From the Ashes of Scandal 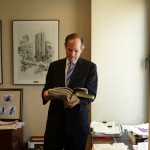 A career flame-out is not necessarily the end of everything for once high fliers like former New York governor and New York Attorney General Eliot Spitzer, who has created another career out of the ashes of the one that went before.

Spitzer was forced from office and the governor’s mansion by a sex scandal, but subsequently tought a course on “Law and Public Policy” at City College.

As the New York Times reports,The traditional path to an academic job is long and laborious: the solitude and penury of graduate study, the scramble for one of the few open positions in each field, the blood sport of competitive publishing. But while colleges have always courted accomplished public figures, a leap to the front of the class has now become a natural move for those who have suffered spectacular career flameouts.

At this point, the transition from public disgrace to college lectern is so familiar that when Mr. Galliano merely stepped foot on the campus of Central Saint Martins, an art and design school in London, speculation rippled around the world — incorrectly — that he would soon be teaching there.Though they rarely pay much, arrangements like these have obvious benefits.

For the new professors, the jobs offer a chance to do something positive rather than sitting home with their regrets, and to begin rehabilitating their image by associating themselves with intellectual pursuits. The students get to learn about history from people who made it — though the lessons generally steer well clear of the professors’ less noble accomplishments. And the colleges get to hire someone who might otherwise be out of reach.Mr. Petraeus, who has a Ph.D. from Princeton and has taught and written extensively, entertained inquiries from many universities, his lawyer said. When he was director of the Central Intelligence Agency, however, before the world found out about his extramarital affair with his biographer, he was mentioned as a possible president of Princeton, not as a professor at CUNY or U.S.C.”

Eliot Spitzer’s continued rise is one that reflects what the New York Times labels the last refuge from scandal – professorships.