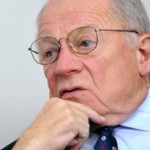 He has been one of America’s most celebrated criminal lawyers, acting for everyone from the Boston Strangler to O J Simpson, but the questions facing F Lee Bailey over his ability to practice law are not deterring the 79 year old from continuing his quest to work at what he loves.

He has a tax debt of almost $2 million but last week one of the state’s top justices provided one opening for the lawyer after the bar examiners denied his admission.

Bailey moved to Yarmouth, Maine in 2010 and sought to return to practicing law. He passed the state bar exam but was denied admission by the Board of Bar Examiners in November in a 5-4 decision, saying he had not demonstrated “by clear and convincing evidence that he possesses the requisite good character and fitness necessary for admission to the Maine bar.”

Bailey petitioned to the state Supreme Judicial Court and Justice Donald Alexander held a two-day hearing in March to review Bailey’s past, his character and his bar application.

Alexander found in a 57-page ruling filed on April 19 that Bailey was almost fit to practice law, except for an outstanding tax debt of nearly $2 million.

“The existence of large debts can compromise professional judgment and client relations in ways that must be recognized in considering admission applications,” Alexander wrote. “The issue remaining unaddressed is the only bar to this Court’s granting Bailey a certificate of good character and fitness to be admitted to the practice of law.”

Alexander gave Bailey and the state until May 6 to file additional material for his consideration on Bailey’s tax debt.

“Although disbarred, Bailey has continued to write, speak, teach, and participate in efforts to improve the criminal justice and corrections system, support economic development efforts and help returning veterans in Maine and Massachusetts, and be an active member of the communities where he has lived,” Anderson wrote. “Of particular note, Bailey has pursued his long-standing commitment to improving educational and job opportunities for inmates transitioning from prison to the community.”