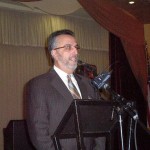 LOS ANGELES – LawFuel.com – US Law News – A former investment fund manager and radio personality who admitted bilking investors out of millions of dollars by falsely promising to purchase corporate bonds backed by the Troubled Asset Relief Program (TARP) was sentenced this afternoon to 120 months in federal prison.
John Farahi, 56, of Bel Air Estates, who operated the Beverly Hills-based New Point Financial Services, Inc. and had a regular radio show on KIRN-AM, was sentenced by United States District Judge Phillip S. Gutierrez. In addition to the 10-year prison term, Judge Gutierrez ordered Farahi to pay $24,366,617 in restitution to 59 victims.
Farahi pleaded guilty last June to four felony counts – mail fraud, loan fraud, selling unregistered securities and conspiracy to obstruct justice while collaborating with his corporate counsel to cover-up the fraud. In a plea agreement filed in United States District Court, Farahi acknowledged that the scheme caused losses of more than $7 million, but prosecutors successfully demonstrated that the actual losses were well over $24 million.
When he pleaded guilty, Farahi admitted that he engaged in a long-running scheme that defrauded victims by using their funds for a range of unauthorized purposes, including paying off prior investors and subsidizing options futures trading. Farahi also admitted that he drew down on personal lines of credit based upon false statements to federally insured banks, including Bank of America, Sun West Bank and U.S. Bank. Farahi also acknowledged that he violated federal securities laws by selling unregistered securities and failing to comply with the SEC’s rules and regulations for selling unregistered securities. Farahi further admitted that he conspired with his attorney to obstruct an SEC investigation by, among other things, altering documents that were turned over to the SEC and providing false and misleading testimony under oath to the SEC on three separate occasions.
Attorney David Tamman, 46, of Santa Monica, was found guilty following trial last year of 10 counts, including obstruction of justice, altering records in a federal investigation, and being an accessory after the fact to Farahi’s crimes. The evidence presented at the trial showed that Tamman conspired with Farahi to obstruct the SEC investigation into Farahi’s fraud scheme. Tamman, who was suspended from practicing law earlier this year by the California State Bar, served as outside counsel for Farahi’s investment company and was a partner at Nixon Peabody. Tamman is scheduled to be sentenced by Judge Gutierrez on May 20.
The case against Farahi and Tamman is the result of an investigation by the Office of the Special Inspector General for the Troubled Asset Relief Program (SIGTARP) and the Federal Bureau of Investigation. The SEC provided substantial assistance during the investigation.
The SEC filed a federal civil complaint alleging violations of the federal securities laws against Farahi and others in January 2010. The lawsuit alleged that Farahi and others conducted an unregistered offering fraud aimed at Iranian-Americans in the Los Angeles area (see: http://www.sec.gov/news/press/2010/2010-3.htm). The SEC subsequently obtained a permanent injunction, as well as orders freezing Farahi’s and New Point’s assets and appointing a receiver over New Point Financial Services.
CONTACT:        Assistant United States Attorney Aaron May
Major Frauds Section
(213) 894-0363
Assistant United States Attorney Paul Stern
Major Frauds Section
(213) 894-0715
Release No. 13-036
TwitterFacebookLinkedInPinterestRedditEmail