You are here: Home / LawStars / How To Get a Law Degree in High Fashion

Law specialties are varied and many. Some, like sports and technology law, have moved center stage and become mainstream for both law schools and law firms alike. A newer area however is fashion law, which was started by Fordham University Law School in 2010. Now the university has followed up with another first: a degree program in fashion law offering an LL.M for lawyers and a master degree for nonlawyers.

The first program offers courses and lectures and a two week fashion boot camp, but the new course is altogether more academically-focused.
Fordham University School of Law broke new ground in 2010 when it launched the first academic center 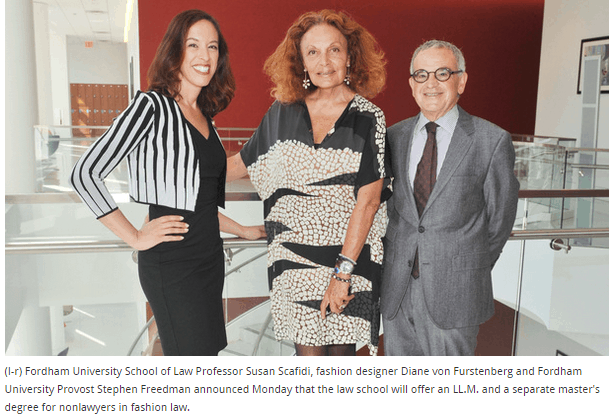 The school announced the programs in June with a press conference that featured Diane von Furstenberg, president of the Council of Fashion Designers of America.

The National Law Journal interviewed Fordham’s professor of fashion law, Susan Scafidi, about the degree and what it offers.

NLJ: Why did it take until 2015 for a law school to offer a specific degree in fashion law?
Scafidi: I think that goes back to why fashion law didn’t exist as a field, and why we had to define it. When I was a junior professor and wanted to write on the topic of fashion law and intellectual property, my tenure committee forbade me to do this. This was not at Fordham—it was elsewhere. They said it was too girly and too frivolous. I made the arguments as to why this was an interesting area, theoretically, and that it’s in a multi-billion-dollar, now trillion-dollar industry. They were unmoved.
I think it comes back to the fact that fashion is an industry that people in authority in the legal profession—mostly men for many years—simply didn’t take seriously. I think that’s why we had sports law decades before we had fashion law. We had arts law and health law and banking law before we had fashion law, despite the fact that it touches all of us, literally.
NLJ: Who do you envision enrolling in the master’s program for nonlawyers?
Scafidi: It would be emerging designers who are excited to have that legal knowledge to add to their skill set. It would be current and aspiring executives in the fashion industry. And people who either are working in the fashion industry or who aspire to do so in specialized areas, such as becoming a licensing director, production manager or even human resources manager. All of those people deal with law on a daily basis but have to figure it out on their own.
NLJ: And who might be interested in the LL.M.?
Scafidi: The LL.M. could be for someone who is a U.S. attorney who is practicing and would like to move into the fashion industry. Or a U.S. attorney who has a number of clients who are in fashion and who would like to understand it more comprehensively. It could be for recent graduates who have taken a law degree and haven’t had the opportunity to dive deeply into fashion law.
And also many international attorneys, because the fashion industry is of course centered here in New York, but also London, Paris, Milan, Tokyo, Dubai, Sydney and many other emerging fashion capitals around the world. Of course, the fashion industry is big in China and India. There is so much to learn in this field, and there are lots of possibilities for different attorneys with different backgrounds and different goals to join us.
NLJ: What topics can students expect to cover in these new programs?
Scafidi: When we think about defining fashion law, I always think of how it touches the life of a garment at every point—from the designer’s dream to the consumer’s closet. That means the intellectual property, the business and finance issues. You have, of course, investment issues, but also real estate and employment. You have international trade and government regulation, so things like customs, tariffs and regulation of safety, sustainability and advertising claims.
Finally, we think about consumer culture and civil rights and dress codes—what people are permitted to wear to schools, to work and on public streets. We have a whole range of different kinds of issues. The idea is that everyone coming through this program will get an overview of fashion law and also be able to dive deeper into the areas they need to know best.
NLJ: Do you think involving well-known designers such as Diane von Furstenberg gives the new program legitimacy?
Scafidi: I think it’s important not only in giving the program legitimacy, but in keeping us connected with the industry, so that we know what to teach and what the industry needs to know. It’s a constant dialogue. We know what is important from a legal perspective, but you can’t really understand the law as it applies to fashion until you understand the business of fashion, which is constantly evolving. It’s much more than legitimacy. It’s really an educational partnership with this industry.
NLJ: Are you surprised by all the attention the program has garnered since you announced it on Monday? The New York Times wrote a story about it.
Scafidi: I am overwhelmed and delighted. Apparently it’s not only interesting to the American audience but to the Italians, the Japanese and Finnish. It’s apparently struck and international chord.