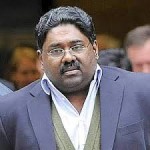 Preet Bharara, the United States Attorney for the Southern District of New York, and George Venizelos, the Assistant Director-in-Charge of the New York Field Office of the Federal Bureau of Investigation (“FBI”), today announced conspiracy and securities fraud charges against RAJARENGAN RAJARATNAM (“RENGAN RAJARATNAM”), a former portfolio manager at the hedge fund management firm Galleon Group, for his alleged involvement in an insider trading scheme. RENGAN RAJARATNAM allegedly conspired with his brother, Galleon founder Raj Rajaratnam, to trade on the basis of material, non-public information (“Inside Information”) concerning Clearwire Corp. (“Clearwire”) and Advanced Micro Devices, Inc. (“AMD”) in 2008, earning nearly $1.2 million in profits in the aggregate. RENGAN RAJARATNAM has not yet been arrested on these charges.