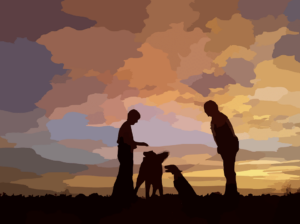 On a recent business trip to Latin America I witnessed an interesting everyday event that directly speaks to the value of leadership when dealing with a group of strong personalities.

As I was walking along a park I saw a professional dog walker lead two packs of dogs into a clearing. Each pack had five or six animals and all the leashes were tied together for the walker to hold. Each pack clearly had some alpha personalities as well as some easily distracted members but they all responded to the walker’s directions. After reaching a point in the park far from the walkways, but not separated by a fence or any enclosure, the walker confidently let go of the common handles to both sets of dogs.

I stopped in my tracks because I thought I was going to witness a great chase scene but, to my amazement, nothing at all happened with either pack. Each dog had a different idea of where the pack should go. After pulling in different directions for a while, and never making any significant progress in any direction, they tired and laid down.

The resulting stalemate and collective lack of movement from these groups of strong-willed, independently acting participants translated, in my mind, to the concept of leadership in the professional services business model.

We know from our work that one of the key characteristics of law firms that are taking market share is strategic teamwork. While most law firms claim teamwork as a defining client-service characteristic, few truly deliver on this promise for a variety of reasons (e.g., a Partner Compensation System that promotes hoarding, personal insecurities of Partners).

A strategic team has:

A Leader – the one who knows which path to take toward.
A Shared Goal, that has
Buy-in from all team members to support and work hard for it, which begets
Confidence that each team member will do their fair share of the work, which justifies
Sacrifices, because not everyone can be in front of the pack…and the view may not be equally appealing for all members of the team.

The independent packs of dogs in the park were collections of equals who jointly accomplished nothing other than frustration followed by a peaceful nap. When they saw and accepted a leader, they easily made directional progress together.

Too many law partnerships still confuse leadership (selecting, grouping, training, and guiding the team along a planned route toward a desired destination) with management (providing for the daily upkeep of the kennel) while expecting the same results from both models. They also view leadership in terms of “lost production” rather than value added, which should be multiples of the lost production when done correctly.

All Partnerships have Alpha members as well as those who are easily sidetracked and will regularly leave the trail to explore every little distraction. Without leadership, most partnerships will accomplish exactly what I saw when their leader gave them more freedom…absolutely nothing.

What happens when you let go of the leashes in your firm?

>> Read:  Where Do Future Law Leaders Get Their News?