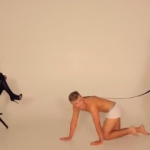 Parody has often been the strong point for law student reviews and so when a group of Auckland law students took on Robin Thicke’s “Blurred Lines” it was parody on their minds.  But not for YouTube, who banned their steamy take on the Thicke video, which features topless models and is designed to blur the lines between consensual and non-consensual sex.

Thicke’s R&B hit was a global hit, but generated some controversy over its ‘breaking taboos’ theme.

The law student version, part of the Auckland University Law School review took five hours’ filming and a day’s editing, turning out something that would turn heads or stomachs, depending on the viewpoint.

“Boy you’d better quit all your sexist ways, so hear our manifesto of the modern age. It’s time to undermine the masculine confines coz we don’t wanna grind.”

The students, Olivia Lubbock, Zoe Ellwood and Adelaide Dunn, took some offence at Thicke’s “presumtive” view about issues of consent.