And one of the attractions for the industry is the prospect of major lawsuits arising from the current pandemic, including insurance and bankruptcy-related lawsuits.

The litigation funder has shown dramatic growth over its 15 years’ history and has not only drawn billions of dollars in investment but also attracted dozens of former Big Law attorneys to the industry.

Many in litigation funding expect a surge of investments in the coming months to help companies access courts as they struggle to recover from the business interruptions caused by the Covid-19 pandemic. That includes legal disputes over insurance coverage, unfulfilled contracts, and claims arising from bankruptcies.

“There will be a slew of litigation that will derive from this experience,” Parabellum CEO Howard Shams said in an interview. “There will be significant claims, many of them meritorious, that will be litigated in the future and which would be entirely appropriate for litigation finance support.”

Those opportunities will play out in a cash-rich finance industry. A survey of more than 40 funders released in November said there was nearly $10 billion in capital committed to financing U.S. commercial litigation, noting the amount of capital made the market favorable for those seeking financing. Funders spent $2.3 billion on cases from mid-2018 to mid-2019, the survey found.

GLS Capital, another private fund, raised $345 million in January. Competition for deals among funders has recently allowed some law firms and plaintiffs to request better terms on deals.

Commoditization in the litigation finance space “was always a risk,” Shams said. But he said his firm has found ways to fend it off, including by closing deals quicker than other funds and by bringing opportunities to law firms rather than the other way around.

The risk of a capital over-supply, which critics warn could result in funders clogging courts with bad cases, has been dulled by the impact of the coronavirus pandemic, Shams said. Hedge funds that specialize in distressed assets had been targeting litigation during the recent bull market, but those big-money players now have an abundance of troubled assets to keep their attention, he said.

“The biggest commoditization I feared was the hedge funds coming in to do things they weren’t designed to do,” Shams said in an interview. “Because of Covid, a lot of people sniffing around in litigation finance left to go back to the things they were built for.”

In a filing with the U.S. Securities and Exchange Commission, Parabellum said it has so far raised more than $433 million with 88 investors. The firm expects a final number in the coming weeks will be greater than $450 million. 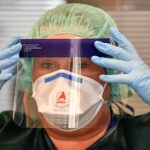