Cherie Blair has promoted pop star James Blunt’s wife Sofia to the board of her law firm, creating another high-profile glamorous rival to the other London glamor lawyer, Mrs George Clooney. 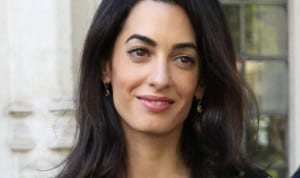 James Blunt, best known for his “You’re Beautiful” hit, married Sofia Wellesley in 2014.  She is the granddaughter of the 8th Duke of Wellington and a graduate of Edinburgh University Law School.

She is regarded as a top lawyer by many.

Omnia Strategy has enjoyed, if that is the word, a controversial history since its formation in 2011 and when it has operated on cases in many African and other countries, including   Nigeria, Ghana, Gabon and Cameroon in west Africa.

Operating as a secretive firm providing top level consultancy work, it also has a Washington DC office but runs from its London office where Cherie Blair has enjoyed an increasingly lucrative practice.  Sofia Blunt has previously worked on business development for Omnia and previously worked for the Libyan Investment Fund, set up to manage oil revenues under the now deceased Colonel Muammar Gaddafi.

She was therefore a logical fit for Mrs Blair’s firm, given the Blairs’ association with a variety of strongmen and authoritarian regime power-holders, including work in Libya and Kazakhstan.

Omnia was paid nearly half a million pounds for legal advice by the government of Albania, where husband Tony has acted as adviser to the prime minister Edi Rama.  Omnia also works for Gabon’s Ali Bongo Ondimba, employing a legal consultant in Libreville.

However the firm received significant criticism over its work with the repressive regime in the Maldives most recently, which has been a government that has faced severe international complaint over human rights issues under President Abdulla Yameen.

Amal Clooney has been battling Yameen (and Omnia) in a widely publicised case last year.