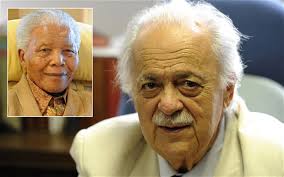 The death of Nelson Mandela has left memories, thoughts and prayers for many, but one man who knew him better than most was his lawyer, George Bizos.

Bizos was spoken to from Johannesburg by Euronews to talk about his old client and friend.
[wp_ad_camp_2]
euronews: “How would you describe Mandela?”

euronews: “What moment of your friendship most stands out for you?”

Bizos: “It was the fact that he didn’t want to be president for more than one term. He wanted to set an example for South Africa’s politicians, and probably to those all over Africa, where presidents usually stay in for life. They say they believe in democracy, but in reality they became dictators.”

euronews: “How did you met him?”

Bizos: “I met Nelson Mandela for the first time at university, in 1948. He was older and became a lawyer before me. In 1954, a court judge demanded who he was. He said: “I am Nelson Mandela and I am a lawyer”. Then the judge demanded: “Where is your lawyer’s certification paper?” He answered that he didn’t have it with him, and the judge said: “Go away. I don’t give you the right to speak to the court.” He assigned the case to me. We won, and from then on we became best friends.”

euronews: “You often visited Mandela on Roben island, where he spent 18 of the 27 years he was in prison. What do you remember from that time?”

Bizos: “He was optimistic that one day the people of South Africa would win their freedom, democracy and equality. When I went to the island for the first time, he came out with eight jailers – in the midst of these eight men. I hugged him and he asked me about his family. Then suddenly he said to me: “George, I haven’t been in here in prison for long but I’ve already lost my manners and become a brute. I forgot to introduce you to my royal guard. And he introduced to me each of his jailers.”

euronews: “When he retired from power, he stayed out of politics, with one exception: AIDS. Why?”

Bizos: “Because it was a secret disease. They didn’t admit it existed. He lost his first son to AIDS. The family didn’t want it known. Mandela insisted it be made public. He found fault with former president Mbeki for not doing enough to deal with the problem of AIDS, which is a serious problem in South Africa.”