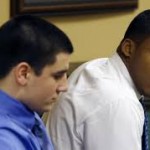 The Steubenville rape trial has created some unique attention through social media, demonstrating again the ability of bloggers, social media commentators, observers and others to create a firestorm of publicity and opinion – informed or otherwise – in respect of a significant trial.

The rape involved two high school footballers who were convicted of the Ohio rape on Sunday in a trial that quickly generated high interest.

The two defendants, Trent Mays, 17, and Ma’lik Richmond, 16, were found guilty of raping a drunk 16-year-old girl at the town and the social media focused on the trial, the dfednants, their football team and investigation that saw them convicted.

The trial was one that saw an Instagram picture of the defendants holding down their 16 year old victim before penetrating the victim with their fingers, amounting to rape before Ohio law.  The picture, like the other details of the case, circulated the Internet and helped create the online social media sensation that utterly characterised the case and lead to increasing comment about the role of social media in the law.

The online video of the night prior to the rape where the victim is mocked and referred to as “dead” while the sexual assault is treated with great humor.

But social media had by no means finished with the Steubenville rape.  There was endless texting about the night and with a flow of commentary from all and sundry.  In addition there was the prosecution of the duo, much of which contributed to the conviction of the men.

The avalanche of social media publicity helped convict the men, creating a documentary record of the lead up to the rape and its aftermath, together with ongoing comments regarding the events.