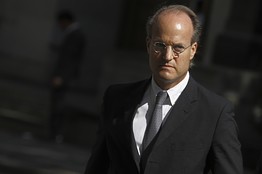 The previously sacrosanct “Swiss bank account” is once again impaled upon the shaft of US Justice, this time with 57 year old Swiss lawyer Edgar Paltzer co-operating with US efforts to stem offshore tax evasion by admitting he conspired to help American clients hide millions of dollars from the IRS.


The US Attorney press release, below, indicates that Paltzer is a U.S.-trained lawyer who began to practice at the Swiss Law Firm in 1998, in the fields of international private client work, wealth transfer planning, successions, trusts and foundations, and eventually became a partner.  He is also licensed to practice in New York State.

Bloombergs report that Paltzer is cooperating with U.S. authorities in their broader investigation of how foreign banks and advisers helped American clients evade taxes, his lawyer, Thomas Ostrander, said.

“His cooperation is complete and without any limitation,” Ostrander said outside of court. “He very quickly made a decision to face these charges and come to the U.S.”

Paltzer’s assistance offers investigators a rare inside look at how Swiss bankers and advisers used sham trusts and corporations and moved cash and jewelry across borders to hide their assets from the IRS. Since 2008, the U.S. has charged at least 90 people in a crackdown on offshore tax evasion, including two dozen bankers, lawyers and advisers.

Paltzer admitted that from 2000 to 2012 he acted as a financial intermediary, helping U.S. taxpayers escape taxes on worldwide income.

“I intentionally formed foundations and corporations which permitted these U.S. taxpayers to hide from the IRS these accounts and the income earned in these accounts,” he told U.S. Magistrate Judge Ronald Ellis. “I assisted these taxpayers in violating their legal duties. I was aware that this conduct was wrong.”

He admitted communicating with clients using code words such as “postcards” to refer to checks sent from an undisclosed account.

Assistant U.S. Attorney Jason Cowley said today that Paltzer had control of, and access to, bank vaults in Zurich, where U.S. taxpayers had stashed assets and valuables.

Ellis yesterday signed a court order prohibiting Paltzer, his wife, or anyone else acting as their agent, from transferring, distributing or moving assets held in safes at five numbered bank vaults at UBS AG (UBSN) in Zurich.

Paltzer, who holds dual U.S. and Swiss citizenship and is licensed to practice law in New York, flew to Manhattan two days ago for the first time since his indictment, and was taken into custody by IRS agents, said Ostrander, a partner at Duane Morris LLP. He is returning to Switzerland, Ostrander said.

Paltzer also has agreed to pay restitution and forfeit fees earned from his crime. He faces a potential prison term of five years, though as a cooperator he’d probably get less.

The US Attorney’s press release:

Preet Bharara, the United States Attorney for the Southern District of New York, announced that EDGAR PALTZER, a former partner at a Swiss law firm (the “Swiss Law Firm”), pled guilty today in Manhattan federal court to conspiring with U.S. taxpayer-clients and others to help U.S. taxpayers hide millions of dollars in offshore accounts from the IRS, and to evade U.S. taxes on the income earned in those accounts.  PALTZER, who was originally charged in April 2013 along with his co-defendant Stefan Buck, was arrested at John F. Kennedy Airport in August 2013.  He pled guilty before U.S. Magistrate Judge Ronald L. Ellis.

According to the Superseding Information, the Indictment, statements made during the plea proceeding, and other documents filed in Manhattan federal court:

PALTZER is a U.S.-trained lawyer who began to practice at the Swiss Law Firm in 1998, in the fields of international private client work, wealth transfer planning, successions, trusts and foundations, and eventually became a partner.  PALTZER is also licensed to practice in New York State.

United States taxpayers are required to report on their individual tax returns the existence of any foreign bank account that holds more than $10,000 at any time during a given year, as well as any income earned in such accounts.

PALTZER, 56, a dual U.S.-Swiss citizen, pled guilty pursuant to a plea agreement to one count of conspiracy charging him with conspiring with U.S. taxpayers and others to evade
federal income taxes and file false tax returns. He faces a maximum sentence of five years in prison, and is scheduled to be sentenced before U.S. District Judge Victor Marrero on February
21, 2014.

Buck, PALTZER’s co-defendant, has not been arrested and remains at large.  The charges against Buck are merely accusations and he is presumed innocent unless and until proven guilty.

Mr. Bharara praised the outstanding investigative work of the Internal Revenue Service, Criminal Investigation.  He also thanked the Department of Justice’s Tax Division for their significant assistance in the investigation.

This case is being handled by the Office’s Complex Frauds Unit.  Assistant U.S. Attorneys Jason H. Cowley, Daniel W. Levy, David Massey, Sarah Paul, and Sarah McCallum are in charge of the prosecution.