British sex scandals are always the best . . pushing boundaries and bras like there’s no tomorrow.  However, a legal sex scandal involving a married solicitor and a barrister having sex in a public  place?  Well . . it really is too much.

The case involves a married 51 year old solicitor, Graeme Stening, who was allegedly involved in a daylight, sex romp with a barrister – a QC no less –  who cannot be named because she subsequently claimed to have been the subject of a sexual assault – giving her automatic confidentiality for life.

However, everything is not quite as it seems with the assault claim.

Mr Stening denies the charge of outraging public decency by engaging in a broad-daylight sexual act during the evening rush hour outside London’s Waterloo station.

Reports indicate that the QC’s belated cries of assault were to cover a drunken episode in which she was involved, although she evidently did not care about the consequences for Mr Stening, whose case may never  actually reach court.

The barrister will argue that she was unwell and could not have consented to what took place.

However the Daily Mail has reported a source saying:

‘She is undermining the profession by making such an allegation in order to keep secret the disgrace of a night in the cells for public sexual activity.’ 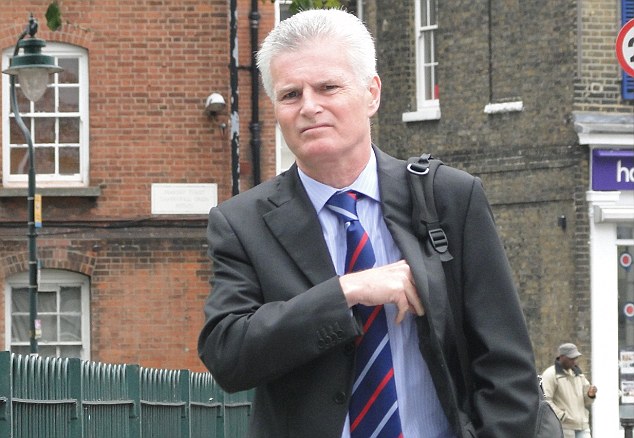 Graeme Stening (pictured), 51, and the QC were drinking together before they were accused of engaging in sexual activity in public near Waterloo station in London

The source went on: ‘It all happened last summer when Graeme met this prominent QC for a business lunch – at her suggestion. It turned into a long, boozy afternoon. At around 7pm they were allegedly seen against a wall right outside Waterloo station. She was said to have been against the wall with her knickers round her ankles.

‘Graeme was also said to be exposed, and was said to have been touching her intimately with one hand, and himself with the other. They were both arrested and taken into the cells overnight to sober up.

‘The next morning, at about 10am, Graeme accepted they had a bit of a snog, but denied any wrongdoing, and was then charged with outraging public decency. But she signed a caution, accepting that they had been engaging in sexual activity in the street. It was not full intercourse, but it was a lot more than a snog.

‘They wouldn’t have interviewed her unless she was sober and she had taken legal advice before signing. And she’s a QC.’

She subsequently went back to the same police office and said she should not have accepted the caution.

‘She said she was going to make an application to have the caution quashed, because she shouldn’t have accepted it. She then said she wanted to make a new allegation – saying she couldn’t remember what happened, because she was so drunk, but now thinks he must have sexually assaulted her.

‘Instead of asking her what on earth she was playing at, and why she didn’t say that before accepting the caution, the officer took it up and phoned Graeme – leaving a message with a member of staff at his work. It’s all maximising embarrassment to him. He was told he would be arrested if he didn’t go for a “voluntary” interview about it.’