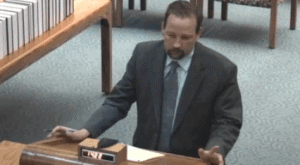 But Kansas lawyer Justin Holstin was so requested, complied and was found to be intoxicated.

Legal Profession Blog reports that he had agreed to the first test when panel members became concerned about his possible – and actual – intoxication. The first test showed a blood alcohol level of .185 and the second a quarter hour later showed .200.

The Blog reported that Holstin conceded that he drove himself to the bar hearing and that he had lied about when he had last had a drink to the hearing panel.

He also raised the results of a drug test administered on February 15 in which he tested positive for morphine. He attributed the result to poppy seeds that he had eaten while alone on Valentine’s Day.

When asked by the court about his way of treating his drinking, he responded “abstinence.”

In rebuttal, the Deputy Administrator Knoll noted that she had googled the poppy seed explanation and that it was reported to her that he smelled of alcohol.