You are here: Home / featured / The New Hollywood Lawyers

Variety magazine has put out its list of some of the top entertainment lawyers practising in the business.

The image (above) shows the top contenders including Ken Deutsch, 37 (second from left) who has done work for DreamWorks, MGM, Miramax, Univision, revolution studios and others. He left his former firm of O’Melveny and Myers to start the century city office of Latham and Watkins handling entertainment, sports and media law work.

Chad Fitzgerald, 39 (far left) is an entertainment industry litigator who has handled cases on behalf of those involved in shows including quote “family Guy”, “King of the Hill” and quote “small world”. As he told variety the typical argument received from entertainment companies is essentially “how dare you. We made you rich”.

Justin Hamill, 37 is a partner at Paul Weiss Rifkind Wharton and Garrison who has been involved in corporate deals involving entertainment and media groups including acting on the acquisition of IMG worldwide by WME.

Molly Lenz, 37 (centre) is a partner at O’Melveny and Myers and one of the main entertainment litigators who has helped does need beat a “profit participation lawsuit brought by the creators of “home improvement”. She has also acted in lawsuits involving Warner Brothers and Fox.

Christopher Perez, 32 (not pictured in the main image) has helped many media participants 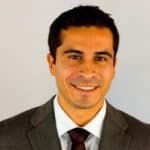 including independent producers and you chew creators to take advantage of their First Amendment rights and has handled a range of copyright and trademark infringement lawsuits involving over 400 films and documentaries.