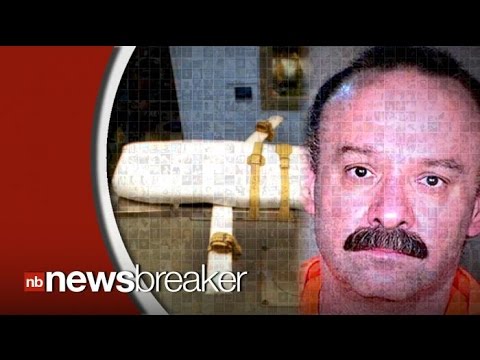 It has been described as inhumane, brutal, primitive and now, the death row slow killing of Joseph Wood has also been described by John McCain as ‘torture‘. This was truly a slow death on death row.

Wood was sentenced for the killng of an ex girlfriend right back in 1991 and was injected with an untested combination of lethal ingredients.  Trouble is, they didn’t work as expected.  He died.  But he took a very long time to do it.

The Guardian’s Mauricio Marin witnessed the killing of Joseph Wood, observing 660 ‘gulps’ and the priest in the death chamber counted 117 minutes. This was not the way a killing should proceed.

You want to be prepared to watch a man who has been prepared to die. Wednesday afternoon was scheduled to be the state of Arizona’s first time using this particular combination of lethal-injection drugs. But this was also my first time witnessing a state execution, so I made sure the state prison staff here had a notepad ready, and I asked my colleagues what it was supposed to be like.

It’s all very clinical, I was told. The end of death row usually lasts about 10 minutes.

This was not what I saw inside the execution chamber when Joseph Wood died. That took 117 minutes, and it was clear that nothing was as it was supposed to be.

After going through prison security, and waiting for hours because of a last-minute appeal to the Arizona supreme court, prison staff escorted us – just a handful of witnesses – across the vast yard and into the small place where a killer was about to be killed. The family of Debra and Eugene Dietz, whom Wood brutally shot and killed at a Tucson autobody shop in 1989, followed. We were all seated under televisions, with images of Wood strapped to the gurney above.

The curtains opened. The medical staff checked the man’s veins. He said his last words – “God forgive you all” – and the lethal drugs began to flow, at 1.52pm. James Wood appeared to fall asleep, albeit strapped down to a table, and he looked straight ahead at the wall. The first 10 minutes went according to plan.

Then, a hard gulp. I looked over to my left: the priest praying the rosary. To my right: the family watching on. Then dead ahead: the side of Wood’s stomach appeared to move, even after the Arizona state prison’s medical staff had announced he was sedated.

I saw a man who was supposed to be dead, coughing – or choking, possibly even gasping for air. I knew this because Wood’s stomach moved at the same time, just like it would if you were lying down and trying to breathe. Then another of those gulps – those gasps for air, movements just from the throat area and sometimes from the stomach, too.

I started looking at the priest’s watch to keep track of time. Five, 10, 20 minutes … an hour had passed. I started to wonder: Will this get called off? Will this ever stop?