[vc_row][vc_column][vc_column_text]The Minority Corporate Counsel Association (MCCA) has named White & Case the Number 1 firm in its 2016 Do Good, Do Well List, which showcases law firms that are successful in achieving high levels of excellence in both diversity and business.

Of the 200 firms on the list—representing the 200 firms with the highest profits per partner, according to The American Lawyer—White & Case took the Number 1 spot, and was one of only two firms that qualified for the Tier 1 ranking. White & Case had the highest percentage of minority partners among all 200 firms, 22.3 percent, which is nearly three times the average for large law firms, according to MCCA.

White & Case is the only firm to be awarded a Tier 1 spot in all three years MCCA has conducted its survey, and is this year the only firm with both Profits per Partner (PPP) above US$2 million and a minority partners percentage above 20 percent.

“This demonstrates what we at White & Case already knew—profitability and diversity can go hand in hand,” says White & Case Diversity Initiative Chair Raoul Cantero (Miami). “These results underscore the importance of leveraging our diversity and inclusion programs to increase our business development and to improve the bottom line.”

Achieving the top spot on the Do Good, Do Well List caps an extraordinary year of recognition for the Diversity Initiative. White & Case won its ninth consecutive 100 percent rating on the Human Rights Campaign’s Corporate Equality Index, which measures LGBT workplace inclusion. It was named the most diverse law firm in the United States by Law360 and, for the third straight year, by The American Lawyer. The Firm earned multiple Women in Business Law awards in the United States, Asia and Europe from Euromoney magazine, as well the 2016 Law Firm Diversity Award from the National Asian Pacific American Bar Association and the Hope Award for Diversity from the Asian Pacific American Bar Association of Silicon Valley. 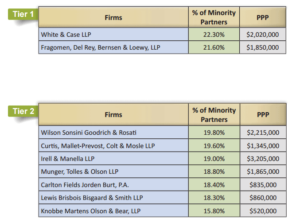